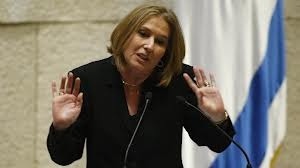 Image from the Times of Israel

Update 14/5: Join protest against Livni on 15 May in London

Israeli ‘Justice’ Minister, Tzipi Livni is a suspected war criminal. This is for her role in ‘Operation Cast Lead’, the devastating attack on Gaza in 2008/9. She was Israel’s Foreign Minister. It is ironic that a ‘Justice Minister’ is not willing to face justice in the UK, one if its closest allies with a well established justice system.

Tzipi Livni is coming to the UK to speak at an event organised by the Jewish National Fund and not to conduct UK / Israel business. To allow her to do this without risking the possibility of facing justice for her crimes, the UK has given her special diplomatic protection.

The current UK Government changed the Law, which would allow serving a warrant on suspected war criminals in the UK which is called Universal Jurisdiction, specifically to protect Israeli officials. They did not do it for anyone else. However, it appears the change still leaves a possibility for an arrest warrant to be issued, unless the UK Government issues a ‘Special Mission’ status.

The UK has shamelessly provided Livni with this protection. This is particularly hurtful to Palestinians as she will be in London on15 May, the date on which they commemorate the Nakba, when in 1948, Israel was created on their land and 800,000 Palestinians were expelled to neighbouring countries.

The UK is wrong to do this. It chooses the side of Israel again over the victim, the Palestinian People. The Nakba continues and the UK is open to Israeli war criminals.

One thought on “For Israeli war criminals, the UK is open for business”