I attended the recording of Aljazeera’s Head to Head with Professor Norman Finkelstein at the Oxford Union on the 30th of May.  Finkelstein is a well known supporter of an end to the occupation of Palestine.  He has been writing and speaking about this iussue for 30 years and believes that his anti-occupation stance has damaged his academic career.  This culminated in his resignation from DePaul Univeristy after his application for academic tenure was denied.  There are suspiscions this was due to external pressure.

I heard Finkelstein speak at the Univeristy of Birmingham, UK a few years ago and I remember being impressed by his understanding of the reality of the occupation and the ned for this to end.  He presented maps to explain this for the first time. At the time, the Boycott, Divestment and Sanctions (BDS) movement was developing but it was not disucssed.

He argued that the conclusion of the call for an end to the occupation, the right of return of the refugees and equal rights for Palestinian citizens of Israel with others, would be the end of Israel.

Suddenly, solidarity activists began to wonder about Finkelstein and about what he now stood for. A ‘darling’ of the solidarity movement had maybe lost his way or perhaps the pressure put on him by those that disagreed with his stance had started to tell. Indeed, some began to wonder whether he had moved from being pro Palestinian to pro Zionist. Indeed that accusation was posted on social media in the eve of the Aljazeera programme after he spoke at a meeting in Oxford.

I had not heard Finkelstein speak since the peace talks came and went and I was intrigued to hear how he now viewed the future of the conflict. 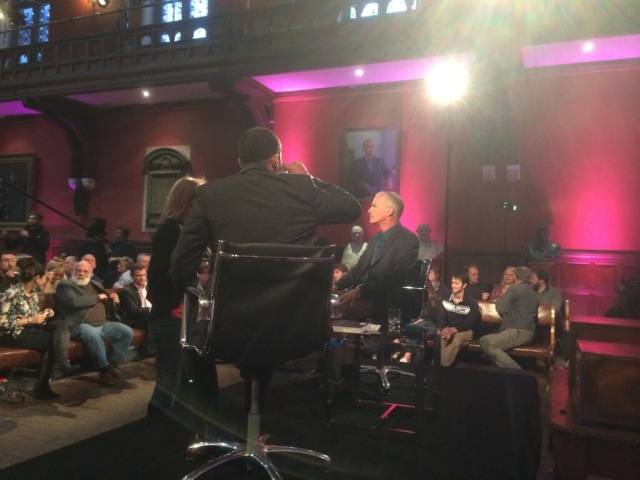 Finkelstein would not be drawn in what his solution to the conflict is but rather referred to what is possible in the sphere of public opinion and what International Law has determined, i.e. Two states on the 67 border with a just resolution to the refugee issue. He defended his labelling of the BDS movement as a cult but emphasised that he supports b, d and s!

He rejected accusations of anti semitism. However, he said that he was troubled by Jews who thought some of his writings were anti Semitic. He was also troubled by the disappointment felt by Palestinians who misunderstood his position and accused him of turning into a Zionist. He said he tries to explain his position to both groups because he is hurt by the accusations.

While saying the only game in town is the two state solution, he said it had not been realised because of of a lack of will on the part of the international community to enforce it. He labelled the ‘peace process’ as an ‘annexation process’.

When asked about the problems with a binational state for Jews and Palestinians, he compared it to the US removing the border with Mexico. Mehdi pointed out that unlike Israel, the US does not occupy Mexico!

My conclusion is that it was the “I choose my words very carefully” Norman that turned up in Oxford. I can’t see what his new book on the ‘solution to the conflict’ can add, but I’m sure it will be eagerly anticipated!

The reality is that until Israelis have the will to acknowledge the Nakba and instruct their leaders to negotiate in good faith for a just peace, the conflict will continue. The current settler Government will not lead them to this. It is leading them to annexation of large areas of the West Bank, isolation and as secretary Kerry said, “BDS on steroids”.

Here is a video link to the Oxford meeting on 29 May 2014 addressed by Norman Finkelstein and Mouin Rabbani.

Prof Finkelstein spoke again in London on 31 May. Jews Sans Frontieres has a blog about this here. He ended up “provoking a walkout by insisting on his two state position and denouncing those who didn’t support it as failing to understand him or it”.

It seems the Finkelstein saga goes on. Our focus should be on helping the Palestinains achieve their freedom rather than on debating one individual academic, interesting though he is!

3 thoughts on “Which Norman Finkelstein turned up to Aljazeera Head to Head with Mehdi Hasan?”