Geographically, the EU covers the whole of Europe but scientifically and culturally it includes only one non- EU state, Israel. It plays football and other sports in Europe, sings in the Eurovision Song Contest and is now to join the UE’s Horizon 2020 research programme. A signing ceremony is to take place on Sunday 8/6. Netanyahu will milk it for all he can. The ‘startup Nation’, ‘Asia’s silicon Vally’ and any new soundbite his officials will dream up.

In 2013 Israel hosted UEFA’s U21 championship, despite a campaign to deduced EUFA from rewarding Israel, which hinders the development of Palestinian sport. Israel controls the movement of Palestinian footballers and decides whether Palestine can host visiting teams for friendlies or competitive games. It has also held Palestinian footballers prisoners, including Mahmoud Sarsak. It never charged him with anything and only let him go after a hunger strike. It also recently shot and injured two young promising footballers, ending their chances of progressing in the game. 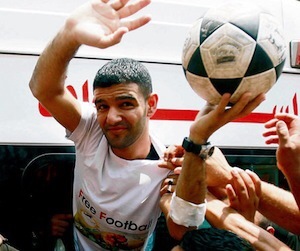 It tried to use this as a lever to ensure Israel joined Horizon 2020 effectively admitting the occupied territories were not part of Israel. Much huffing and puffing followed. Israel was desperate to join this lucrative programme but would not agree to the terms if the Guidelines. Eventually Israel and EU compromised on the terms of joint initiative.

The EU is not obliged to do this, so why is an exception made to allow Israel to benefit from our tax €s? Is it In Europe? Does it contribute to the EU budget? Does it comply with international Law? Has it implemented relevant UN Security Council resolutions? Does it conform to Human Rights Conventions? The answer to all of the above is a resounding No! In fact Israel has contravened the first clause of the EU-Israel Association Agreement, which should have resulted in its suspension.

The illegal settlement of Har Homa built on Abu Ghunaim

If an EU state conducted itself as Israel does, illegally occupying and oppressing another people, its membership would be suspended. EU Politicians would be lining up to explain how sacred European values are and that a state which does not uphold them cannot be a ‘member of the club’. Would the EU have exceptionally allowed Apartheid South Africa knowing now what Apartheid is? Again the answer is no. Why then make an exception? Some will say, Europe is weighed down by history and any action it takes to pressure Israel to end illegal acts, will bring out the accusations of Antisemitism.

By allowing Israel,exceptionally, to join the Horizon 2020 programme, the EU sends completely the wrong message if it wants to play a role in resolving the conflict. Israel has demonstrated beyond doubt its intent to continue and entrench the occupation. As European citizens we say “No more ‘we must avoid any act that will derail the peace process’ please“. Suspend the EU Israel Association agreement and take Israel out of our horizon until it upholds our values.

In doing this, the EU cannot be accused of discriminating against Israel because it is not obliged to include it in Horizon2020 as it is not a European state. Instead it would be upholding its own values and not singling it out for special treatment.

2 thoughts on “The European Horizon exceptionally includes Apartheid Israel, why?”