I watched Israel’s Prime Minister Benjamin Netanyahu today (20 August) at his press conference, which he held with his Defence Minister Ya’alon. I had a flashback. I remembered the fall of Baghdad. The particular image was that of Mohammad Saeed Al-Sahhaf, Iraq’s Information Minister at the time. He was speaking to the media, denying the Americans had reached Baghdad but unbeknown to him, American tanks were in the background. He was living in denial.

Today Benjamin Netanyahu too was living in denial. At his press conference, he was at pains to point out Israel’s successes in the attack on Gaza and in particular successes against Hamas. He failed to mention that foreign airlines were cancelling flights to Tel Aviv for fear of Hamas rockets. Just half an hour before Netanyahu’s press conference, Alqassam Brigades spokesman, Abu Obeidah was warning foreign airlines to avoid Ben Gurion airport from 3 am GMT ON 21 August.

Whatever you think of Hamas and whichever side you support, it is clear that the military capability of the resistance groups in Gaza appear to be largely intact. The rockets are still being launched and are reaching Tel Aviv and Israelis in the settlements on the edge of Gaza are still within reach.

Netanyahu claims that the IDF has destroyed all the tunnels but Hamas has broadcast footage of tunnels and fighters demon starting how they survived during the fighting and their still current capability.

Netanyahu has failed to achieve what became rolling objectives from the terrorist campaign on Gaza. Initially it was all to do with the kidnapping and killing of three settlers near Hebron, not by anyone from Gaza but allegedly ordered and financed by Hamas. Then it was about eradicating the rockets. Later it became about the tunnels. Eventually it was about disarming the resistance.

None of the above objectives have been achieved to date. Instead, as the ceasefire collapsed on 19 August, Israel returned to the targeting of family homes. On that evening, Israel bombed the Aldalou family home in Beit Hanoun. It later became apparent that they thought they had targeted Mohammed Aldaif, Head of the AlQassam Brigade. In fact, he was not hit but his wife and seven month old baby were murdered as Widad was breast feeding Ali.

Netanyahu was clearly hoping to announce a major ‘kill’ but instead he killed more women and children. He and his spokesmen repeatedly compare Hamas with the Islamic State (IS). He referred to their use of children as human shields which all but Zionists have refuted. He talked of IS murdering children. Well, he and his defence minister are responsible for the murder of over 500 hundred children. The comparison of a resistance movement, working to end Israel’s occupation (whatever you think of their methods) with a murderous rogue group IS is a false one. Slaughter of civilians with a knife is little different to slaughter with the press of a button, which drops a one tonne bomb on a family home. IS are the two first letters of ISrael. 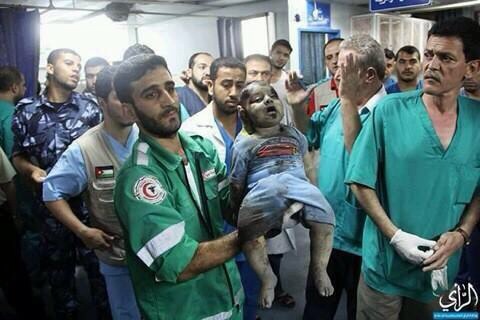