In interviews with the Jewish Chronicle, Conservative  leader David Cameron and Labour Leader Ed Miliband tried to outdo each other in the depth of their friendship with Israel. They both understood Israel had a ‘duty’ to protect its citizens, and while Miliband questioned the proportionality of Israel’s response to last summer’s right cites from Gaza, Cameron had no criticism to offer.

In his Jewish Chronicle interview, Miliband defended his criticism of Israel during last summer’s Gaza conflict, saying he was right to describe the military action as “wrong and unjustifiable”. But that he was “committed to obtaining security for Israel and a viable and secure Palestinian state”. 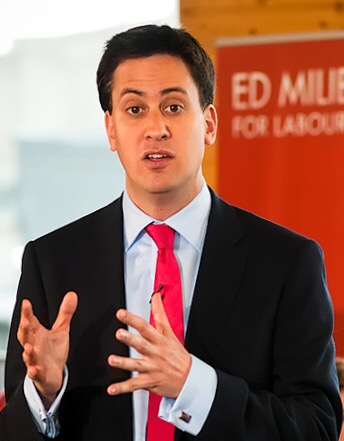 In his interview with the JC on 30/4/2015 Cameron says “As PM, putting yourself in the shoes of the Israeli people, who want peace but have to put up with these indiscriminate attacks – that reinforces to me the importance of standing by Israel and Israel’s right to defend itself.

He regards Israel’s actions as purely defensive as opposed to the offensive nature of Palestinian actions. He says “I feel very strongly that this equivalence that sometimes people try to draw when these attacks take place is so completely wrong and unfair. Because Israel is trying defend against indiscriminate attacks, while trying to stop the attackers – and there’s such a difference between that and the nature of the indiscriminate attacks that Israel receives. I feel that very clearly. I’ve seen it very clearly as Prime Minister and I think it’s important to speak out about it.

But both leaders spoke within a week of the British elections and chose their words carefully so as not to antagonise ‘the Jeeish Community’. But in avoiding any mention of Israel’s continuing violations of International Law and International Humanitarian Law, they were pandering to the pro Israel Lobby.

Both leaders are wary of losing funding from the pro Israel Lobby. Miliband has already felt this simply for criticising Israel albiet mildly over the Gaza war last summer. See here. Both leaders also made nauseating speeches at their party’s respective ‘Friends of Israel’ receptions.

What if Britain was illegally occupied? What would they do?

Would Cameron or Miliband stand for British children being abducted in the middle of the night or for British women giving birth at checkpoints? Would they accept the arrest of British MPs?

Would they not call for Boycott, Divestnentand  Sanctions against the occupier?

I am confident that the answer to all of the questions above would be a resounding no. My confidence comes not from an idealistic stand but from recent history. It comes from a war fought thousands of miles away, when Britain sent a flotilla to endArgentina’s occupation of the Falkland Islands. It did not accept that any historic link between Argentina and the Malvinas justified its takeover by force.

The illegal Israeli occupation of Palestine is not a minor incident. For British Palestinians, it is a catastrophe, which started in 1948. Its continuation to this day is the reason for Pslestinan resistance and for rockets flying out of Gaza. The now infamous Sderot was built on the land of the Palestinuan village, Najd, which was depopulated in 1948. Its residents descendants were under Israeli bombardment, refugees in Gaza last summer.

It is true that the British Palestinian community in Britain is not as organised or as financially capable as the pro Israel Lobby. It is true that while Palestine has support from the British Public which gas not as yet been converted into Sufficuent pressure on Government to change policy. But the tide is turning. Prospective Parliamentary Candudates up and down the country have felt the pressure like no time before this on Palestine. Next time it will be even more intense.

Those MPs elected on the 7th of May and the future Government will feel the heat on this issue until a more moral and just policy on Palestine is adopted. After all Britain bares a moral responsibility to the Palestinian people. The hundredth anniversary of the Balfour  Declaration is likely to take place during the next Parliament.

It is time the wrong was righted through immediate recognition of Palestine and sanctions on Israel with the first announcement of more illegal settlements, which will surely come.

One thought on “What would Miliband or Cameron do if Britain was occupied?”