The Middle East Monitor published this article on 29/12/2015 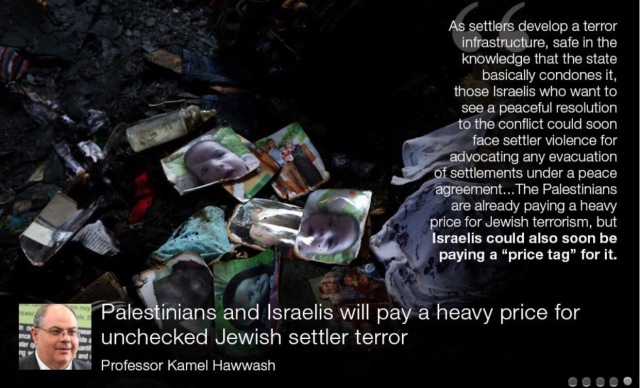 Image from the Middle East Monitor

The recent Israeli wedding video in which revellers danced with knives and guns, and stabbed pictures of Palestinian baby Ali Dawabsheh, who was burnt to death by Jewish settlers, should trouble Israel’s supporters and society. A wedding is an occasion for friends and family to celebrate the union of two people. Instead, this particular wedding was a festival of hate and murderous celebration of the burning alive of a Palestinian baby (and presumably his mother and father, both killed in the same attack). Instead of raising a glass to the happy couple, they raised guns and knives in hate and a determination to continue along this path.

Israel’s Defence Minister Moshe Ya’alon, who identified quickly the attack on the Dawabsheh family as “Jewish terror” has not pursued its perpetrators with the same vigour as his security forces chase Palestinians who are suspected of violent attacks against Israelis. Initially, he claimed that the government “believes they know who carried out the terrorist attack, but there is difficulty in putting them on trial.” He said that he hopes that, “we’ll find the evidence necessary in order to bring the perpetrator of this heinous attack to justice.”

However, while there has been some condemnation, including from Israeli Prime Minister Benjamin Netanyahu, the outrage of ordinary Israelis does not match the seriousness of the incident. Netanyahu himself tried to play down this and other terrorist acts committed by Jews, refusing to equate them with Palestinian “terror”. “There is a difference between Arab terror and Jewish terror,” he claimed. “Here we condemn and they [the Palestinians] praise.” He was referring clearly to the terrorist attacks that resulted in deaths of Palestinians, those of the Dawabsheh family earlier this year and Muhammed Abu Khdair in 2014.

According to Netanyahu, “Unlike Jewish terror, which is limited in scope, Arab terror attacks us incessantly and is widespread.” Israeli society condemns Jewish terror, he insisted, whereas “in the Palestinian Authority they name squares and streets after terrorists.” The reality, of course, is that Israel names boulevards and squares after Jewish terrorists, including Menachem Begin and Yitzhak Shamir.

If one only counts the attacks on Abu Khdair and the Dawabsheh family as Jewish terror then it is possible to dismiss them as isolated incidents. However, there has been a worrying rise in settler violence, coordinated under the label of “price tag” attacks which target Palestinians on both sides of the Green (1949 Armistice) Line. They have included attacks on mosques and churches, the most recent of which was against the Church of Loaves and Fishes on the Sea of Galilee, which was damaged after being set on fire in a “price tag” attack by Jews.

In addition, there are almost daily incidents of settlers uprooting olive trees, attacking Palestinians tending to or harvesting their crops and, in the case of Hebron, attacking children on their way to school. The incidents in the West Bank included a worrying attack in which a Jewish extremist tried to stab a “rabbi for human rights”.

The Israeli Defence Forces (IDF) has also faced minor acts of vandalism. An army reserves post was ransacked by settlers at Yitzhar in April 2014. At the time, Ya’alon vowed “to fight domestic terrorism, against those outlaws who attack IDF commanders, soldiers and Border Police who are doing their utmost day and night to safeguard the country and citizens. The State of Israel will not tolerate such criminal activity, which is terrorism in all respects.”

The “arson” attack on Jerusalem’s Jewish-Arab school in 2014 demonstrated that not only Palestinian establishments and property is at risk of Jewish terror; Jewish targets could also be attacked if the perpetrators judged them to be promoting peace or coexistence.
In June 2013, the Ynet website reported that there had been a “price tag epidemic” with 788 attacks having taking place in 18 months. Palestinian officials claimed that, by August, there had been 375 such attacks this year alone.

Jewish terror is not a new phenomenon. Israel itself was created as a result of the terror that drove 750,000 Palestinians out of their homeland in 1948. Terrorist organisations such as the Irgun and the Stern Gang epitomised this terror. Israeli MK Tzipi Livni, whose father Eitan served in the Irgun, considers him to have been a “freedom fighter”. The Irgun, though, was a terrorist organisation which carried out attacks not only against the British Mandate authorities but also Palestinian civilians.

The despicable murders of Abu Khdair and the Dawabsheh family are, therefore, only the tip of the iceberg of rising Jewish terror by which Israeli society has not been stirred sufficiently to call for major action against it by the security forces. I believe that this is part of a concerted effort by Israeli leaders to avoid labelling what they are acts that reasonable people would call terrorism; they want to deny that they have home-grown Jewish terrorists in a state which claims to be in an ongoing fight against terrorism. The Israeli media is also reluctant to use the term terrorist to refer to Jews who carry out violent acts against Palestinians; it prefers “rightists” or “extremists”. Israeli society needs to acknowledge that it has a problem, to understand it and to deal with it.

Writing in Haaretz, Samuel Heilman asks, “Who taught the Jewish radical settler youth to celebrate murder?” when discussing the settler wedding video. “Seeing these Jewish zealots of the hilltop youth and their supporters makes me think that education for incitement and hatred is going on no less in their schools and communities,” he observed. “The same calls that have been heard demanding that the Palestinians change and reform their children’s education if they truly want peace must now be issued in the Jewish community.” I believe that this is the kind of demand that Israelis of all political persuasions should be making in order to understand and then deal with settler hatred and violence.

As settlers develop a terror infrastructure, safe in the knowledge that the state basically condones it, those Israelis who want to see a peaceful resolution to the conflict could soon face settler violence for advocating any evacuation of settlements under a peace agreement. Many of the 600,000 illegal settlers now in East Jerusalem and the West Bank might even join the “price tag” enterprise to delay any evacuations, thus turning Israeli settlers against other Israelis. The Palestinians are already paying a heavy price for Jewish terrorism, but Israelis could also soon be paying a “price tag” for it.

Professor Kamel Hawwash is a British Palestinian engineering academic based at the University of Birmingham. He is a commentator on Middle East affairs and is Vice Chair of the Palestine Solidarity Campaign. He writes here in a personal capacity.