First published by the Arab Weekly﻿ on 20 November 2016

The election of Donald Trump as president of the United States seems to have emboldened Israeli politicians, who clearly feel their strongest ally will provide them with the chance to end any hope of freedom or independence for the Palestinians.

Soon after Trump’s win, the Israeli cabinet approved two sets of draft legislation. One would retroactively grant legal status to illegal outposts across the West Bank in defiance of international law. The other would ban the use of loudspeakers to carry the adhan — Muslim call for prayer. The outpost legalisation bill is likely to pass in the Knesset, despite initial hesitation by Finance Minister Moshe Kahlon, who is now supportive.

Reaction from the administra­tion of US President Barack Obama against the illegal settle­ments was immediate and strong. US State Department spokes­woman Elizabeth Trudeau said Washington was “deeply con­cerned” by the proposal, express­ing hope that “it does not become law” as “this would represent an unprecedented and troubling step that’s inconsistent with prior Israeli legal opinion and also break long-standing Israeli policy of not building on private Palestinian land”.

She added: “This legislation would be a dramatic advance­ment of the settlement enter­prise, which is already gravely endangering the prospects for a two-state solution.”

This was in sharp contrast to the deafening silence from the Trump camp. Trump, who claims to be a better negotiator than his competitors for the presidency, has not questioned the $38 billion aid package the United States gifted Israel for which it gets nothing in return regarding America’s policy of creating a two-state solution to the conflict.

The bill to silence the Muslim call for prayer drew no reaction from either the current or future US administrations. However, it angered Palestinians who say Israel is acting to please Israelis in illegal settlements who claim the call to prayer annoys them and is noise pollution. Palestin­ians see it as another attempt to erase Jerusalem’s proud non- Jewish religious and cultural heritage.

The bill angered and united Christian and Muslim Palestin­ians. Greek Orthodox Archbishop of Sebastia Theodosios Atallah Hanna condemned the bill. Hanna said he considered the Israeli ban as “a dangerous and unprecedented step that comes as part of Israel’s racist policy aiming to Judaise Jerusalem”. Today, they are targeting mosques and tomorrow is the churches’ turn, he said.

Palestinian-Israeli members of parliament used their status to recite the adhan from the podium of the Knesset in defiance of the measure. Ironically, the bill’s progress through the Knesset is stuttering because ultraorthodox politicians fear it might restrict broadcasts from synagogues.

It is unlikely that the Trump camp, which is well-known for its anti-Muslim rhetoric, will protest such restrictions to the freedom of worship. Israeli politicians expect upcoming US policies to be even more in their favour.

Right-wing Education Minister Naftali Bennett was quick to declare that “Trump’s victory is an opportunity for Israel to immediately retract the notion of a Palestinian state in the centre of the country, which would hurt our security and just cause”.

He concluded that “this is the position of the president-elect, as written in his platform, and it should be our policy, plain and simple. The era of a Palestinian state is over.”
Jason Greenblatt, a legal adviser to Trump, said: “The two sides are going to have to decide how to deal with that region but it’s certainly not Mr Trump’s view that settlement activity should be condemned and that it’s an obstacle for peace — because it is not the obstacle for peace.” 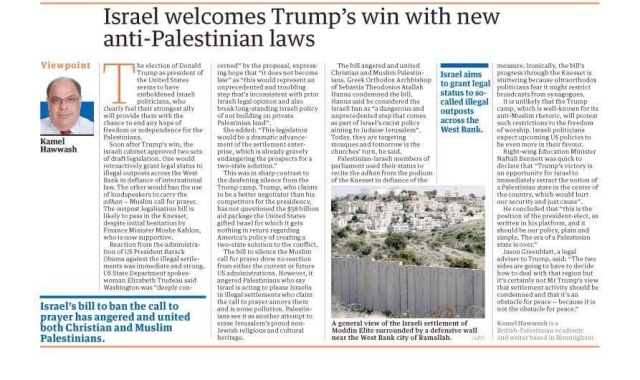