Since his inauguration, Trump seems to have rolled back on his embassy com­mitment, much to the surprise of many. 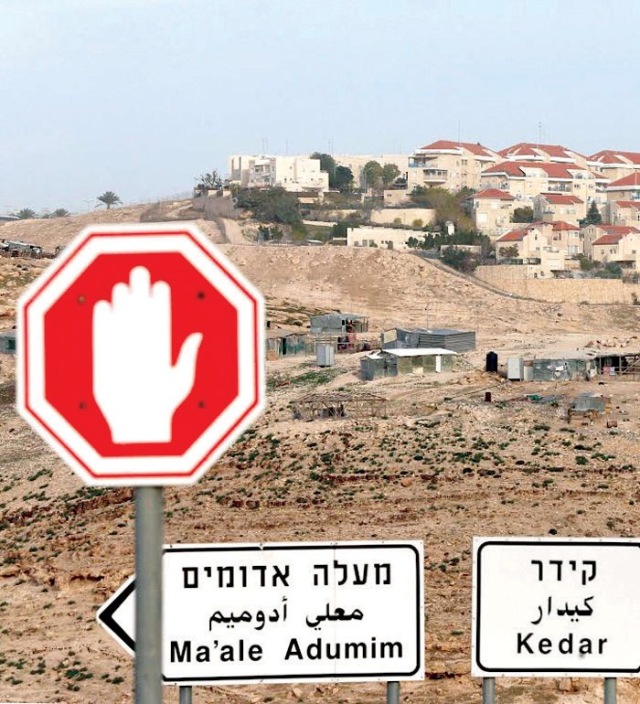 Road signs are seen in front of the Israeli settlement of Maale Adumim in the occupied West Bank, on January 17th. (Reuters)

The question of whether the Trump administra­tion would quickly honour the pledge to move the US embassy from Tel Aviv to Jerusalem has exercised the minds of Palestinians, Israelis and the wider world.

In 1995, the US Congress passed the Jerusalem Embassy Act, which recognised Jerusalem as the capi­tal of Israel and required a change in the embassy’s location by May 1999.

However, this was effectively re­sisted by every US president since then despite occasionally promises to carry it out as the United States continued to seek a peace deal between Israel and Palestinians.

During his election campaign, Donald Trump was explicit in his promise to move the embassy when he addressed the American Israel Public Affairs Committee conference in March 2016 and said: “We will move the US embassy to the eternal capital of the Jewish people, Jerusalem.”

Trump’s choice for US ambas­sador to Israel, David Friedman, seemed to be a means of facilitat­ing this move. Friedman vowed to “strengthen the bond between our two countries and advance the cause of peace within the region and look forward to doing this from the US embassy in Israel’s eternal capital, Jerusalem”.

Friedman also let it be known that he would live in a private apartment in Jerusalem and would work out of Jerusalem rather than Tel Aviv.

Since his inauguration, however, Trump seems to have rolled back on his embassy com­mitment, much to the surprise of many. His spokesman, Sean Spicer, said recently: “We are at the very beginning stages of even discussing this subject.”

Spicer dodged a question from a Sky News corre­spondent who asked: “What is the strategic interest for the US in the embassy move?”

The reality is that there is no strategic benefit for the United States in moving its embassy. The mere speculation that the move could happen raised alarms across the world.

The Palestinians warned of dire consequences with Palestine Liberation Organisation (PLO) officials threatening to revoke rec­ognition of Israel. The Palestinian president and the king of Jordan met in Amman in late January and agreed to “take steps” if the move happened.

Undoubtedly Trump knows that the United States’ strategic interest would be in securing a peace deal between Israel and Palestinians rather than unleash a backlash that he cannot predict or control by moving the US embassy.

The status of Jerusalem would be part of what would be a historic peace deal that he said he wanted to negotiate. Trump’s own experi­ence of negotiating should tell him to avoid measures that antagonise either party to a negotiation.

Some have argued that the em­bassy move would be so damag­ing to US strategic interests that a peace deal would be pushed well beyond Trump’s term in office.

In moving its embassy to West Jerusalem, the United States would be recognising Israel’s sovereignty over West and East Jerusalem, which no other country does. It would further be violat­ing international law. UN Security Council Resolution 478 rejected Israel’s declaration that Jerusalem (East and West) “complete and united” is its capital.

An embassy move could com­plicate matters if other countries followed suit. British support for a move of the US embassy came from former secretary of State for Justice Michael Gove. He wrote in the Times of London that “Israel is the only state where we don’t locate our embassy in the nation’s capital and the only ally the For­eign Office has refused to let the queen visit”.

He added: “So let’s celebrate the centenary of the Balfour declara­tion by moving our embassy to Jerusalem next year and inviting [Queen Elizabeth II] to open it. What are we afraid of?”

A Foreign Office spokesman quickly dismissed the idea, stat­ing: “The UK has an embassy in Tel Aviv and a consulate-general in Jerusalem. We have no plans to change the location of our diplo­matic presence in either Israel or the occupied Palestinian territo­ries.”

Observers note, however, that although a possible embassy move seems to have stirred the Pales­tinian leadership into action, the continuation of the status quo is more damaging to the prospects of signing a peace agreement. Palestinians point to the contin­ued judaisation of Jerusalem, the expansion of illegal settlements on occupied Palestinian land, which may be annexed by Israel at a later stage.

Critics argue that unless a major effort is put into combating the settlement project, there will be no Jerusalem left for the Palestin­ians to claim as their capital or a contiguous plot of land in the West Bank to claim as their free inde­pendent state.

They say that the move of the US embassy to Jerusalem is highly sensitive but is not the crux of the matter: The end of the occupation without annexing Palestinian ter­ritories and the right of return are.