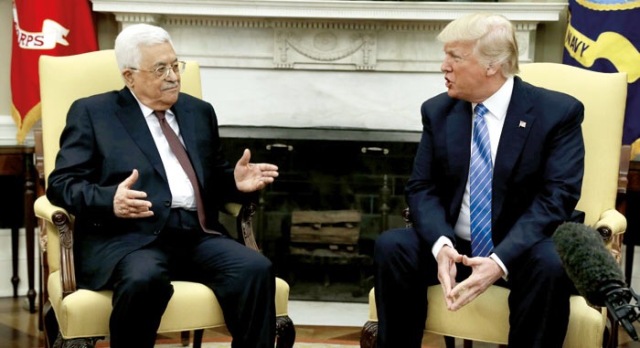 The US president, stand­ing in front of the Palestinian flag at their news conference on May 3, lauded Abbas for his role as signa­tory to the 1993 Oslo peace accords with Israel, his commitment to fighting “terrorism” and for secu­rity cooperation with Israel. Trump described how the two sides worked “unbelievably well together… They work together beautifully.”

Trump urged the Palestinian pres­ident to work against incitement and reiterated that a peace agree­ment could not be imposed on the Israelis and Palestinians but that the United States would “do whatever is necessary” to help the two sides reach such an agreement.

Trump held back on publicly de­manding the Palestinian Authority end payments to families of pris­oners or those killed during attacks on Israelis, something Israeli Prime Minister Binyamin Netanyahu had pushed for prior to the meeting.

Abbas cited the Arab peace initia­tive, which calls for two states with East Jerusalem as the capital of a Palestinian state and a fair solution for the refugee issue. The Palestin­ian president praised Trump’s “cou­rageous stewardship” and “great ne­gotiating ability.”

Trump tweeted about the meet­ing, saying: “It was a great honour to welcome President Abbas to the White House today. We’re hoping for a great agreement between the Palestinians and Israel that allows both peoples to live in safety and in peace.” The tweet was later inexpli­cably removed.

Reaction to the meeting was mixed. A headline in the pro-Hamas website Al-Resaleh read: “Abbas ap­plauds himself alone in Washing­ton” and characterised the situation as Abbas “alone in the wrestling ring” with Trump and completely powerless.

The Jerusalem daily Al-Quds sig­nalled approval of the meeting with the headline: “Trump: I welcome President Abbas in the White House as a peacemaker.” While Al-Ayyam, a news site sympathetic to the Pal­estinian Authority, said the compro­mise Abbas was offering Trump was in “Israel’s interest” but that the ex­treme Israeli right-wing would reject it anyway.

Nasser Laham, editor-in-chief of Bethlehem-based Ma’an News Agency, wrote that Abbas did not take anything new to the White House in terms of demands and warned that any kind of “honey­moon” between Trump and the Arab world would be over quickly if the United States moved its embassy to Jerusalem.

Writing on the web site of Al Ja­zeera, Palestinian lawyer and ana­lyst Diana Buttu said the Trump-Ab­bas meeting was, for Palestinians, as expected “useless.” She character­ised the emphasis on “process” as a perusal of “the same failed strat­egy pursued by three US presidents, spanning six administrations and 24 years.”

Hani al-Masri, director general of Masarat, a Palestinian organisation focused on formulating strategic policies and studies, acknowledged that by meeting Abbas and calling him “president,” Trump endowed legitimacy on Abbas, which may counter what seems to be an at­tempt to regionalise the Palestinian issue.

Masri noted that, in his address, Abbas failed to mention the daily struggles of the Palestinians and the impact of the continued settle­ments, home demolitions, evictions and the prisoner hunger strike. Mas­ri warned that focusing again on the role of the United States, important though it is, ignores to some extent the changing voting pattern of some key countries as was seen in a recent UNESCO resolution on Jerusalem.

Trump is planning to visit the Holy Land, possibly emphasising his commitment to securing the ul­timate deal. But he has yet to pro­vide a foundation for this deal that would assure Palestinians it would be based on international law or meet the minimum requirements for justice that they expect.

While talk of the peace process kicks into life once again, Israel ap­pears to continue breathing a sigh of relief that there is nothing to fear from the Trump administration. On the contrary, it will feel emboldened to build and expand while the Pal­estinians once again pin their hopes on others.