When it comes to the various stakeholders in the Israeli Palestinian conflict Israel has guaranteed American support in almost whatever it does. Other stakeholders, including the EU, have consistently criticised Israeli government policy but consistently failed to back it up with any action. That is, possibly, until now.

The Obama administration was castigated by the pro-Israel lobby for its supposed lack of support for Israel despite granting it a 10-year $38 billion military aid package, the likes of which no other state could dream to secure. In fact, over half the aid the US hands to other states goes to Israel.

Obama missed a trick on not making the aid package conditional upon any progress in the talks between the Israelis and Palestinians, or a halt to settlement construction, which the US sees as “illegitimate”. Neither Netanyahu’s brazen snub to Obama when he addressed the US Congress without coordination with the White House, nor the humiliation of American Vice President Biden – who while on a visit to Jerusalem in 2010 was met with an announcement that Israel planned to build 1,600 home for Jewish Israelis in units in the illegal settlement of Ramat Shlomo which is attached to Jerusalem – was enough to trigger such conditioning.

The US is a member of the Middle East Quartet now renamed the ‘Office of the Quartet,’ which brings the EU, Russia and the United Nations together. It describes its mandate as “to help mediate Middle East peace negotiations and to support Palestinian economic development and institution-building in preparation for eventual statehood”. The Quartet’s last key report was published in 2016. The report focussed on violence and incitement, Gaza and Palestinian governance and settlement expansion, land designations, and denial of Palestinian development.

In the area designated C under the Oslo Accords, Israel maintains full control over both security and planning. The denial of Palestinian development is enacted mostly through the denial of permits for building construction. The Quartet noted that “only one permit for Palestinian housing construction in Area C was reportedly approved in 2014, and there do not appear to have been any in 2015. In the five-year period from 2009 to 2013, only 34 building permits were approved for Palestinians in Area C, out of at least 2,000 submissions”.

The report further noted that there were over 11,000 demolition orders pending against Palestinian structures, three quarters of which are on private Palestinian land. The report acknowledged that “as Palestinians are consistently denied permits to build legally, they are left with few options but to build without permits”.

There was a significant increase in the number of Palestinian structures demolished across the West Bank in the first four months of 2016, with some 500 demolitions of Palestinian structures by the Israeli authorities and nearly 800 Palestinians displaced, more than what was carried out throughout the entire year of 2015. Although many of these were not dwellings, the loss of structures such as water wells, solar panels, and animal shelters has impacted the livelihoods of over 2,500 people in the first half of 2016. The trend continued in 2017 and to this day. 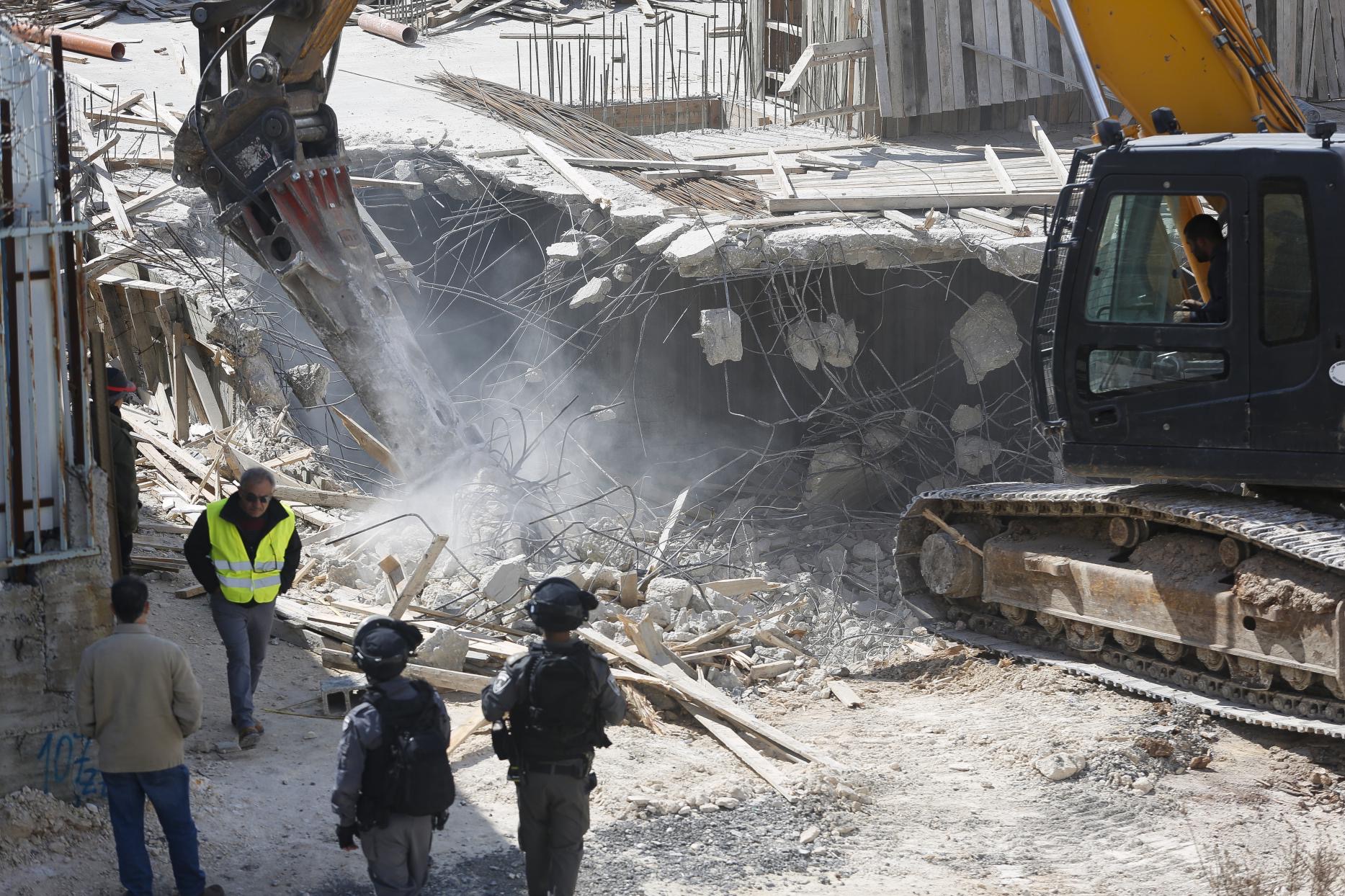 Gaza’s International Airport, which opened in 1998, was destroyed by Israel in 2001. It was built with funding from Japan, Egypt, Saudi Arabia, Spain, and Germany. To this day the airport remains in ruins and no sanctions were ever taken against Israel by either Germany or Spain.

In January of this year Israeli forces demolished some 15 structures in Khirbet, including homes and the only school in the small hamlet, which is located on the outskirts of the village of Beit Furik in the Jordan Valley in the north-eastern occupied West Bank.

In July the Dutch government lodged a protest with Israel over the confiscation of electricity equipment, which was said to be a hybrid power system of both diesel and solar power. The electrification project in the southern Bethlehem region was donated by the Dutch government and cost about 500,000 euros ($590,806), 350,000 euros ($413,564) of which went to Jubbet Al-Dhib, according to the report in the Israeli daily Haaretz. The Dutch Foreign Ministry requested Israel return the equipment and is “currently assessing what next steps can be taken,” the ministry’s statement to Haaretz said.

In August Israeli troops dismantled a structure built for a nursery for 25 Palestinian children in the village of Jabal Al-Baba near Jerusalem claiming it was built without a permit. This followed the demolition a few days earlier of a small primary school in the southern West Bank and the removal of solar panels used to power another school. This drew criticism from the EU which expressed “strong concern about the recent confiscations of Palestinian school structures undertaken by Israel in Bedouin communities in the occupied West Bank,” adding that “every child has the right to safe access to education and states have an obligation to protect, respect and fulfil this right, by ensuring that schools are inviolable safe spaces for children”.

But has Israel pushed its luck too far with the EU?

Despite Israel’s destruction of facilities funded by the EU, history shows it has protested to Israel but has not taken action. However, this could be about to change.

Reports have emerged that eight EU countries, led by Belgium, have drafted a letter to be delivered to senior Foreign Ministry officials demanding compensation amounting to €30,000 ($35,456) for confiscating and demolishing structures and infrastructure built by them in Area C of the West Bank, which is under full Israeli control. This follows Israel’s refusal to return the confiscated equipment as demanded by the eight countries which are members of the ‘West Bank Protection Consortium,’ a body through which they coordinate humanitarian assistance to Area C.

The letter stresses that “the demolition and seizure of humanitarian equipment, including school infrastructure, and the interference in the transfer of humanitarian assistance contravenes Israel’s obligations under international law and causes suffering to the Palestinian residents”.

However, Israel claims that European activity in Area C is not humanitarian assistance but “illegal development that is being done without coordinating with Israel and with the aim of strengthening the Palestinians’ hold on Area C”. This claim was previously made in 2015 by Benjamin Netanyahu who ordered the demolition of some 400 Palestinian structures built in the West Bank with European funding.

While the international community has often talked the talk about Israeli crimes, this is a rare example of action that could at least make Israel think twice before acting. While this is a small step by eight EU countries it could mark a significant and necessary change in policy from condemnation of Israeli policies to tangible action. EU citizens should be outraged that contributions from their taxes to alleviate Palestinian suffering and build peace, are being wasted by Israel while goods from illegals settlements continue to make their way to EU supermarket shelves.

If the EU is serious about peace and its support for a two-state solution then it can use existing instruments to exercise its influence. This includes suspending the EU-Israel Association Agreement for Israel’s failure to adhere to a clause which states that “relations between the parties, as well as all the provisions of the agreement itself, shall be based on respect for human rights and democratic principles”.

Israel’s clear failure to respect Palestinian human rights should finally trigger a suspension of this agreement.