Israel is using its control of entry points to the occupied Palestinian territories to punish human rights activists and organisations.

Fifty years after Israel took control of all of historic Palestine in the Six-Day War, it is taking a number of approaches to the sta­tus and laws that operate in what the rest of the world consid­ers illegally occupied Palestinian territory. Israel regards the area as “disputed” territory that it might consider returning — or more likely return part of — to secure peace with its neighbours.

In reality, Israel behaves as if it is sovereign over the whole of historic Palestine. It is important to note that UN Security Council Resolu­tion 2334 distinguished between Israel and the occupied Palestinian territories, thus rejecting Israeli sovereignty over them.

International law does not consider Israel as sovereign over the occupied territories, including East Jerusalem, which the Israelis in 1967 annexed in the Six-Day War. In recognising Jerusalem as Israel’s capital, US President Donald Trump referred to Israel as a “sovereign nation” that can “determine its own capital.” He is wrongly recognising Israel’s sovereignty over the whole city.

There is no way to access the ille­gally occupied Syrian Golan Heights except through Israel. That border has been effectively shut since the 1967 war, with the exception of some movement facilitated by the UN peacekeeping force for humani­tarian reasons. Even this move­ment came to a halt after violence erupted in Syria.

Entry to the West Bank and East Jerusalem is under Israel’s control, too. Palestinians with a Palestinian Authority (PA) passport enter and exit only via King Hussein Bridge, while Jordanian passport holders issued with Israeli visas by Israel’s Embassy in Amman can enter via the Sheikh Hussein Bridge further north.

Those carrying foreign passports, including European and US citizens wishing to visit either Israel or the occupied Palestinian territories, can enter through one of the bridges or through Tel Aviv’s Ben Gurion Airport.

The situation for human rights activists who wish to visit the oc­cupied territories has changed con­siderably over the past few years. While some have been subjected to questioning about the purpose of their visit and who they were plan­ning to meet, most were allowed to enter, especially those who man­aged to convince Israeli authorities they were tourists visiting holy sites.

Faced with increased scrutiny of its policies and an escalating Boycott, Divestment and Sanctions (BDS) movement, however, Israel is using its control of entry points to the occupied Palestinian territories to punish human rights activists and organisations. It does this in addi­tion to pushing allies to implement anti-BDS laws, particularly in the United States, where some 20 states have such laws.

While Israel has long denied entry at will to activists and EU and US citizens of Palestinian heritage, it is now routinely denying entry to those working in organisations sup­porting BDS or individuals who are vocal in criticising it and supporting BDS. Israel has passed legislation amending its law of entry to specifi­cally deny access to such individu­als. This included Hugh Lanning, chairman of the UK-based Palestine Solidarity Campaign and myself. Shortly after this, it denied entry to Anwar Makhlouf, the head of the Palestinian community in Chile and three Swedish citizens, members of the World Council of Churches, over alleged BDS affiliations.

Israel went further in implement­ing its ban in July, ordering Lufthan­sa airline to deny boarding to five members of an interfaith delegation at Washington Dulles International Airport, including Jewish Rabbi Alissa Wise. Jewish Voice for Peace, an activist organisation opposed to the occupation, said this was the first time Israel had barred Jews, including a rabbi, entry to Israel be­cause of political positions. Israel’s law of return stipulates that all Jews have the right to move to Israel and become a citizen. The airline claimed: “We don’t know who these people are. We have no information as to why the Israeli government does not want them to enter. We simply have to abide by the rules and regulations of every country in which we operate.”

Israel has gone even further, using intelligence about those planning to travel to one of its entry points to ban them before attempting to board flights. On November 13, it announced it was barring seven EU officials from travelling with a 20-member delegation of European Parliament members, national lawmakers and mayors over “sup­port for Israel boycott” and for their aim to raise awareness on the plight of Palestinian prisoners, including political figure Marwan Barghouti. Israel’s Interior Ministry said the delegation had planned to visit Barghouti in Hadarim prison. It an­nounced its decision a week before the delegation was to visit.

The European Union — France in particular — might have been expected to stand up for its citizens but instead used the sovereignty issue as a reason not to challenge Israel’s decisions. A French Foreign Office minister said: “One can regret this Israeli decision but it remains nonetheless sovereign.”

This is rather bizarre as the European Union does not recog­nise Israeli sovereignty over the occupied Palestinian territories. It was left to the Association for Civil Rights in Israel (ACRI) to challenge the decision. The group’s executive director, Sharon Abraham-Weiss, said: “The interior minister is not authorised to serve as a commissar standing at the gate and deciding for the country’s citizens and for the residents of the occupied territories, who are dependent on Israeli border crossings, which positions are ap­propriate to be heard. Freedom of expression is not just the right to express oneself but also the right to be exposed to opinions, even opinions that outrage and infuriate the majority in Israel.”

The European Union must take a stand on the issue of sovereignty, especially as it relates to the oc­cupied Palestinian territories, to ensure non-Israelis can access them or consider taking their own measures, including denying entry to illegal Israeli settlers wishing to visit. Otherwise, the message to Israel is “Carry on; there are no red lines to cross.” 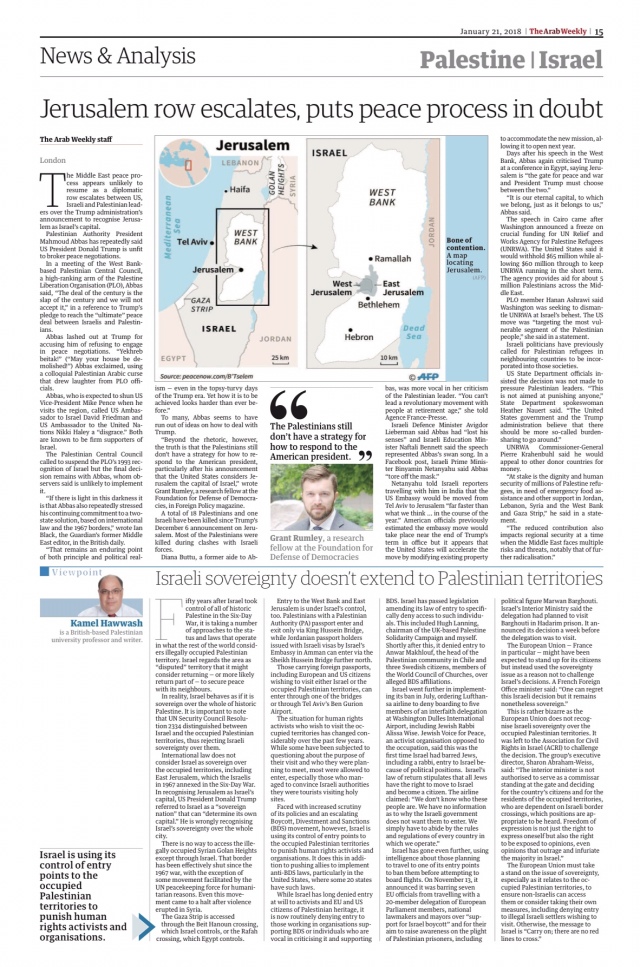 One thought on “Israeli sovereignty doesn’t extend to Palestinian territories”