Britain appears to be developing closer relations with Israel on many fronts.

Breaking with the norm? Britain’s Queen Elizabeth II (L) and Prince William arrive as she hosts a Garden Party at Buckingham Palace in London, on May 31. (AP)

Prince William’s visit to Israel this month, the first official British royal visit to the country, could not come at a more inappropriate time.

More than 100 Palestinians have been killed by Israeli gunfire since March 30, when mass protests near the Gaza-Israel border broke out to highlight the plight of the besieged enclave and the rights of refugees. More than 10,000 people have been reportedly injured.

Among the fatalities was Razan Al-Najar, a 21-year old volunteer medic who was shot in the back while tending to injured protesters near the Israeli fence. Her death caused international outrage. Nicolai Miladinov, UN special coordinator for the Middle East peace process, tweeted: “Medical workers are #NotATarget!”

Israel, however, has not been held accountable. A resolution tabled at the UN Security Council to provide protection for the Palestinian people was vetoed by the United States hours after Razan’s death.

The world community failed to condemn Israel for the use of live ammunition fired by highly trained snipers, when less lethal force could have been used. There were no reports of injuries either to Israeli army personnel or nearby settlers.

Britain called for an independent inquiry into Israel’s killings of Palestinians only to abstain in the UN Human Rights Council when a resolution setting up the required inquiry was tabled.

Criticism of Britain’s U-turn on an independent inquiry grew when Burt said he could not verify how British weapons would be used once delivered to Israel. This raised concerns that British weapons may have been used by the Israeli military to kill Palestinian protesters, which is in contravention of the licences that allowed their sale.

Burt explained that once a risk assessment had been conducted, the licences were issued and no further checks made.

The Campaign Against Arms Trade said the United Kingdom issued approximately $300 million worth of arms licences to defence companies exporting to Israel, substantially more than the $115 million sold last year and the $27 million licensed in 2015.

Britain appears to be developing closer relations with Israel on many fronts.

Britain’s Royal Air Force took part in a flyover to mark Israel’s Independence Day last month, even though it coincided with the Palestinians’ commemoration of 70 years of their Nakba.

Last December, HMS Ocean, a flagship of the British Royal Navy, docked in Haifa. It took part in exercises with the Israeli Navy and Air Force. To encourage British-Israeli business cooperation, particularly in the high-technology sector, the United Kingdom created the UK Israel Tech Hub. Its website confirms that it focuses on “tech areas with the potential to contribute to growth in both the UK and Israel.”  The areas include cyber-security, biomed, clean tech and fintech.

The United Kingdom is also firmly against placing pressure on Israel through the Boycott, Divestment and Sanctions movement and has attempted to stop British local authorities excluding companies complicit in Israel’s occupation from applying for contracts or for their pension schemes to invest in such companies.

Prince William’s visit to the region is to include stops in Jordan and the occupied West Bank. The Palestinian Authority welcomed the visit, however, it is likely to be a only courtesy call in Ramallah, rather than a “meet the people” affair. The pomp and pageantry will be with the Israelis. Significantly, the prince will not visit Gaza to see first-hand the effect of the siege — imposed by the leaders whose hands he will shake and whose wine he will drink — on 2 million people.

It is the norm that royal visits avoid politics but by choosing to make such a visit in the current climate, every step and every word uttered by the prince will matter.

To avoid the many pitfalls, it would have been better for this visit to take place after a peace deal between the Palestinians and the Israelis, rather than after the significant loss of life in the Great March of Return. 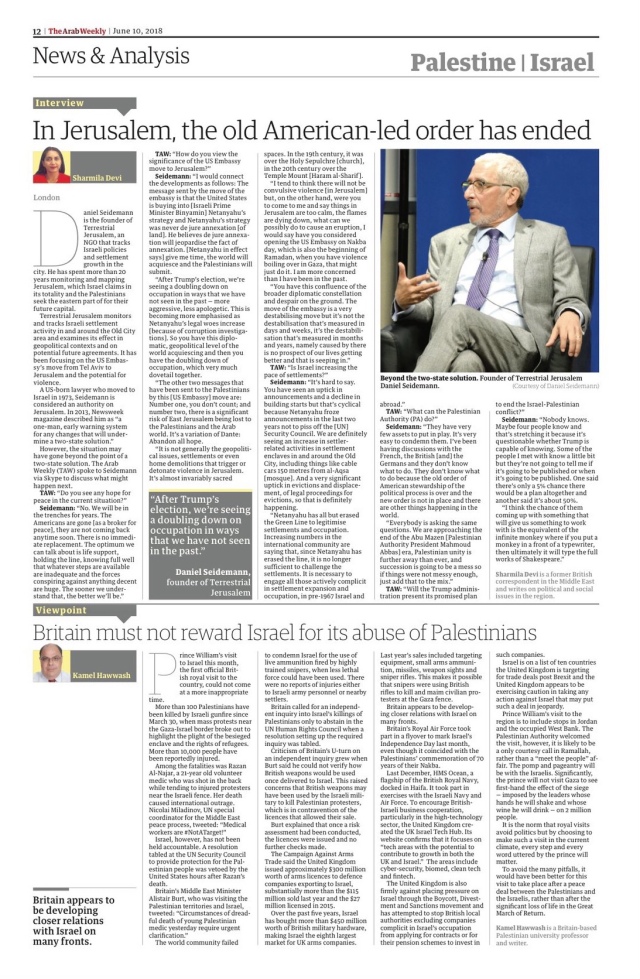