2018 was one of the worst years for the Palestinian cause, suffering serious blows in its quest for peace and independence. The outlook for 2019 is the same, but Palestine’s resilience and hope in the face of adversity is unwavering.

2018 is likely to be remembered as one of the worst years for the Palestinian cause. However, there are reasons for optimism, which the Palestinians need to build on if they are to turn the tide of Israeli wins. US President Donald Trump figured heavily in the reversals, while the Palestinian people’s resilience was the most important reason for hope.
The year started with Palestinians reeling from Trump’s decision at the end of 2017 to recognise Jerusalem as Israel’s capital and to move the embassy at some point in the future. They thought the delay not only gave them breathing space to gather support for a reversal of the decision but that it might also be kicked into the long grass. They miscalculated.

Trump, pushed by a group of advisers whose support for Israel and disdain for Palestinians was equally strong, quickly set to task, moving the embassy in record time. Their desire to humiliate Palestinians was clear when the move was made on Israel’s independence day, coinciding with Palestinian commemorations of the 71st anniversary of the Nakba. As Ivanka Trump led the celebrations in Jerusalem, Israel’s snipers gunned down over 60 Palestinians protesting peacefully at the fence that separates Gaza from the rest of historic Palestine.
The decision to recognise Jerusalem as Israel’s capital and to move the embassy was condemned in the UN General Assembly, despite threats made by US Ambassador to the UN Nikki Haley to the states that voted against the US.
Trump’s team continued to promise that they would reveal his ‘ultimate deal’ for peace while working to empty it of its key elements prior to its launch. Their next target was the issue of the Palestinian refugees. Their attack on this core issue was two-fold, first to redefine who qualifies for this designation and secondly to weaken if not close the UN Agency, UNRWA, which provides vital services for nearly five million refugees in five locations within historic Palestine and neighbouring Arab countries. Attempts to pressure Jordan and Lebanon to redefine who qualifies for full citizenship, failed.

The US thought that by withdrawing funding from UNRWA, the agency would collapse. By August, America had ended all funding to UNRWA, forcing the agency to reassess whether it could continue to offer services, especially schooling. A combination of additional funding from existing donors and the development of new sources has essentially sustained UNRWA for the coming year. However, next year will be just as challenging in order to ensure UNRWA continues to offer services to vulnerable refugees until a just solution is found for their plight.
The American administration gave a green light for Israel to continue building illegal settlements and to expand existing ones. US Ambassador David Friedman has suggested that there is actually no occupation. His calls on the US State Department to stop using the term were followed by the omission of the term from the Department’s annual Human Rights report.
In 2018 under pressure from the US Administration, the Palestinians saw a marked change in the unwavering support they had from Arab states for their cause. The US Embassy move was met with some protests from fellow Arabs but the Arab regimes were largely silent or non-apologetic. The Bahraini foreign minister saw no issue with the US moving its embassy to West Jerusalem.

Palestinian Authority President Mahmoud Abbas was summoned to Riyadh to be pressured into accepting the Trump deal when it was published and more recently, 2018 saw rapid steps towards normalisation between Israel and a number of Gulf states, with the most high-profile step an official visit by Israeli Prime Minister Netanyahu to Oman, despite there being no diplomatic relations between the two countries. The same period saw visits by other Israeli officials to Oman and the UAE as well as Israeli sports teams on visits to the UAE and Qatar being met with the Israeli flag and the national anthem. It was also noteworthy that support for the Saudi Crown Prince following the Saudi journalist Jamal Khashoggi’s murder in the Saudi Consulate in Istanbul came from Tel Aviv and Benjamin Netanyahu.

In July, Israel passed its Nation State Law, which many saw as Israel formally declaring itself an apartheid state. The law gave the right to self-determination in Israel only to Jews. It relegated Arabic from an official language to a language with special status and declared the settlements as a ‘national value’. It also declared that any Jew from anywhere had a right to ‘return’ to Israel, while denying this right to Palestinian refugees.

Israel’s settlement building expanded, house demolitions and evictions of Palestinian families from their homes in Jerusalem continued unabated. The Bedouin community of Khan Al-Ahmar just about survived eviction in 2018, but Israel has its sights on this land and will continue to work to evict and demolish.
Talk of the annexation of the West Bank and calls on the US to recognise the annexation of the occupied Syrian Golan Heights were made. The year also saw an escalation in break-ins by Israeli settlers into Al-Aqsa mosque, often accompanied by Israeli lawmakers under the protection of Israeli security services. In essence the status quo has continued across the West Bank with an extremist Israeli administration emboldened by unlimited support from the American administration and a silent world.

The division between Hamas and Fatah continued, despite attempts at reconciliation. 2018 saw the Palestinian Authority impose its own sanctions on Gaza in an attempt to pressure Hamas into relinquishing power. It also saw the PA President entrench his control over Palestinian institutions. He reconstituted the Palestine National Council (PNC), devolved its powers to the smaller Palestine National Council (PCC) and most recently dissolved the Palestine Legislative Council. The combination of these actions have been widely condemned by the various factions, including those represented in the PLO, many of which have refused to partake in meetings in 2018.

Key decisions taken by the PNC and the PCC, including an end to security cooperation with Israel, declaring the Oslo Accords null and void and withdrawing recognition of Israel have not been implemented. While the Americans recently withdrew funding from the PA, they continued the funding of the security forces, as this is an Israeli interest.

Hope in 2018 came from the Palestinian people themselves. The Great Return March, organised by civil society and supported by all factions launched its first protest at the Gaza fence with Israel on March 30, and has bypassed its 40th week of protests. A heavy price was paid with nearly 200 deaths and thousands of injuries. The injuries included women, children and clearly marked medics and journalists. Israel’s highly-trained snipers killed at will, sometimes targets hundreds of metres away. The Palestinians responded with rudimentary fire kites, which they launched to cross the fence, causing damage to crops on the other side, but little more.

The names of martyrs Razan Najjar and Yaser Murtaja in Gaza were joined by the new Palestinian icon Ahed Tamimi, from the village of Nabi Saleh, as a reminder of Palestinian resistance and resilience. Ahed famously slapped an Israeli occupation soldier for invading her property and for the injuries her cousin suffered only hours later at the hands of Israeli soldiers. She served eight months in Israeli jails but came out committed to continuing the fight for liberation.

The resilience of the Palestinians continues to inspire supporters of justice across the world to do what they can to help, while they watch their governments support an occupying oppressive state that hides behind democracy. The main weapon of choice for them is the Boycott, Divestment and Sanctions (BDS) movement, which has sent Israel into a frenzy, allocating a ministry and millions of shekels to counter it. Its most recent win saw HSBC divest from Israeli arms company Elbit, a decision that will send shockwaves across Israel and in particular its arms industry.

It is that combination of Palestinian resilience and solidarity across the world that provides hope that despite the bleak situation Palestinians faced in 2018, the cost of Israel’s occupation and oppression could rise rapidly in 2019.
The iconic image of Palestinian protester A’ed Abu Amro, which made it into the Guardian’s top 20 pictures of 2018, certainly epitomises the resilience of the Palestinian people. 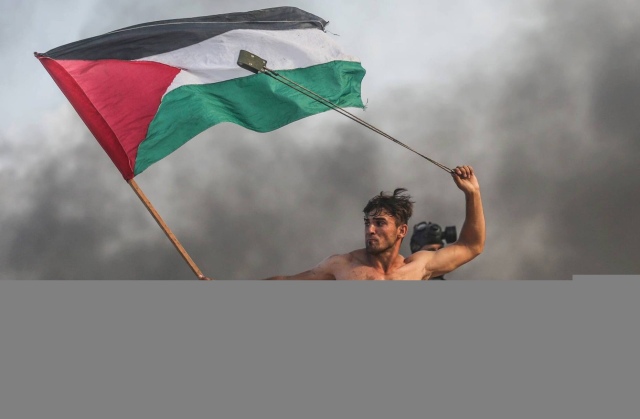