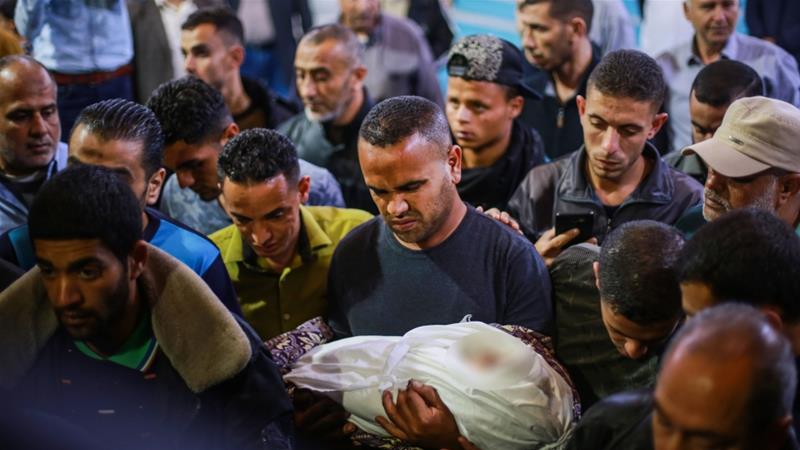 14-month old Seba Abu Arar killed in the recent Israeli attack on Gaza on her way to burial.

Israel can operate with impunity in Gaza and its allies will file it under its ‘right to defend’ itself without anyone extending those same rights to Palestinians.

Gaza is once again under attack. Israel. One of the world’s major military powers, equipped with the most sophisticated and deadly American weapons, unleashed another deadly assault on the world’s largest open-air prison, home to two million Palestinians – 800,000 of whom are children.

Neither the bleak situation they face due to the siege—which has entered its 13th year—nor the start of the Holy month of Ramadan was enough to dissuade Israel from hitting Gaza hard.

At the time of writing, 25 Palestinians and 4 Israelis had been killed and several injured on both sides. The Palestinian casualties included a toddler and two pregnant women. Nearly 700 rockets and grenades had been fired out of Gaza and Israel hit over 200 ‘targets’ in the Gaza strip.

A truce came into effect at 4:45am local time on Monday morning, bringing much needed quiet to Gaza and the surrounding Israeli settlements. The truce was brokered between Israel and the Palestinian factions by Egypt.

The terms of the truce reported by Maan News Agency include an end to Israeli violence towards those taking part in the weekly Great Return March and an undertaking to loosen the siege on Gaza. It also includes the extension of the fishing zone to 12 nautical miles. Those are essentially the terms that have been agreed to previously, but which Israel repeatedly violates.

The question of who started the violence is disputed. However, Israeli forces killed two Palestinians on Friday during the weekly Great Return March, which appears to have triggered the response from the factions in Gaza, which lasted two full days.

Both sides have indicated that they do not want a long and full confrontation.

Recently re-elected Israeli prime minister faces a possible indictment on corruption charges as he tries to form a government. Israel is hosting ‘Eurovision’ on 18th May in Tel Aviv and is facing calls for artists and broadcasters to boycott it due to Israel’s human rights record and its oppression of the Palestinians.

A full-blown war that extends to the date or near it, and which could potentially produce international outrage at the casualties and increase concerns about security, would hardly be an advert for the event. Israel had already been struggling to attract visitors to the event.

The Palestinians had been attempting to broker a long-term truce, and a number of key Hamas leaders were in Egypt to discuss this with Egypt’s intelligence chiefs.

The relatively rapid move to contain the violence is an indication that neither side is looking for a prolonged confrontation.

The reactions of various stakeholders in the violence, which could have longer-term ramifications, particularly on the attitude to President Trump’s ‘ultimate peace deal’ – has not been out of the ordinary.

The Palestinian Authority—which broke off talks with the US Administration following Trump’s recognition of Jerusalem as Israel’s Capital—condemned specific incidents rather than the whole Israeli attack. However, there were no immediate moves to reverse sanctions imposed on the strip to force Hamas to cede its rule over Gaza.

The Arab world was mostly silent, merely reporting on the unfolding events. There were no calls for an emergency meeting of the Arab League.

Iran condemned the ‘barbaric’ Israeli attack and blamed it on the impunity Israel enjoys, particularly that provided by the United States.

Turkey condemned the targeting of the building housing Anadolu Agency, and President Erdogan promised that Turkey would continue to expose Israeli atrocities in Gaza and the rest of the Occupied Territories.

US Secretary of State Mike Pompeo was quick to assert: “The Israelis have every right to defend themselves.”

He added, “I’ve seen video that we can’t validate just yet but where there have been strikes on homes, civilian populations.” He claimed that “These rockets were fired with civilians around them in order to protect from return fire. This is terrible.”

Many member states of the EU also condemned the rockets from Gaza.

“The rocket fire from Gaza towards Israel must stop immediately. A de-escalation of this dangerous situation is urgently needed to ensure that civilians’ lives are protected,” a spokesperson for European Union foreign policy chief Federica Mogherini said on Saturday evening.

French Ambassador to Israel, Helene Le Gal, expressed “solidarity with the population in Israel’s South.” Her German colleague, Susanne Wasum-Rainer said she strongly condemned the attacks on Israel, but at the same time urged “all parties to protect civilian lives.”

The Foreign Ministry in Berlin also condemned the “massive rocket fire” on Israel. “There is nothing that could justify attacks on civilians. Israel has the right to defend itself and to protect its citizens,” the ministry wrote on its Twitter account.

Several other countries based their statements around the same narrative that Israel has a ‘right to defend herself’, but this same right for Palestinians was conspicuously missing. Of course, there was no condemnation for Israel’s continued killing of peaceful protesters at the Gaza fence or the targeting of civilian apartment blocks in Gaza.

Some are more equal than others

The death of Palestinians seems to not matter to Israel’s allies. Its right to ‘self-defence’ is sacrosanct, whatever the circumstances. The death of pregnant women and children seems an acceptable form of ‘self-defence’.

Even when an independent commission investigates Israel’s actions, and accuses Israel of war crimes and crimes against humanity over the past year at the Gaza fence, the international community is unmoved.

Israel as an occupying power, which continues to oppress the Palestinian people and to breach international law and its duties under the Fourth Geneva Convention, cannot claim a right to self-defence.

By supporting it and shielding it from accountability, the international community provides Israel with impunity to kill and maim, but it also tells Palestinians that Jewish-Israeli lives matter more than Palestinian ones.

In the case of the Americans, the message is even starker going forward. In the forthcoming ‘ultimate deal’ Palestinians can expect to be treated with the same disdain politically as they were physically, in this attack. Their rights matter far less than those of Israelis and therefore the plan to be unveiled after Ramadan will be biased in Israel’s favour.

No, Palestinian lives and rights matter equally to Israelis. A non-hypocritical world would acknowledge this and bring Israel to account for its continued crimes.

The message from Palestinians is clear. They too have a right to defend themselves, and while the world is silent about Israel’s breaches of international law, it is hypocritical to require them to adhere to a law Israel thinks it can operate outside of with impunity.