Kushner claimed the political plan would not be based on the Arab Peace Initiative but would be somewhere between the initiative and what Israel’s position is.

The “Peace to Prosperity” conference, referred to as the Manama workshop, has concluded with Trump administration personnel Jared Kushner and Jason Greenblatt claiming it to have been a success, and those opposed to it decrying its content and outcomes.

The question now, just as it was before the workshop, is where next for the Palestinians.

US President Donald Trump was accused of putting the cart before the horse in offering the “Peace to Prosperity” workshop in Manama as the economic part of the so-called “Deal of the Century” before outlining the political part of the deal.

The argument was that it would be extremely doubtful for those who may be interested in investing in the Palestinian areas to do so unless they could be assured of a stable situation into which they would invest.

Who in their right mind would invest in Hebron while the centre is a ghost town, settlements grow and clashes between the Palestinians and the Israeli forces, which erupt regularly, could suddenly escalate into a full confrontation, closing the city and therefore its business activity? Who would invest in the Jordan Valley, which Israel plans to keep, but that the Palestinians see as their land bank?

Kushner, Greenblatt and US Ambassador to Israel David Friedman gave a series of interviews as participants set off to Bahrain claiming the political issues would not be discussed. However, Friedman expressed his support for Israeli Prime Minister Binyamin Netanyahu’s pre-election promise to annex parts of the West Bank, stating his country has “a right” to do so.

Kushner claimed the political plan would not be based on the Arab Peace Initiative but would be somewhere between it and what Israel’s position is. This is code for a “no” to a Palestinian state and “no return” for refugees.

As far as Kushner is concerned, there will be no Palestinian capital in Jerusalem following Trump’s recognition of the city as Israel’s capital. The only element that Israel and Kushner will, therefore, take from the Arab Peace Initiative is “normalisation.”

What Palestinians can take away from Manama is that they remain the key player in the dynamics of peace in the Middle East. The message that the Americans heard loud and clear was that talking economic peace remains just that, talk, until a political solution acceptable to both the Palestinians and Israel can be achieved.

The goal of normalisation, which Israel craves and the Americans support, is predicated on the implementation of the Arab Peace Initiative, especially the creation of a sovereign, independent Palestinian state with East Jerusalem as its capital and a just solution for the Palestinian refugees.

The Palestinians’ next destination is closer to home. It is to finally end the division that has caused incalculable damage to the cause. The Manama workshop united the Palestinians in its rejection and they must build on this.

Talk of economic prosperity seems a pipe dream while the Palestinian Authority teeters on the verge of collapse due to a lack of funds following America’s decision to cut all funding to the Palestinians and Israel’s withholding of taxes it collects on its behalf.

The Palestinian ship needs to be steadied before it can sail towards peace and prosperity, while the Israeli bulldozer needs taming if peace is to be realised. The current American administration can play a vital role in this, but can it end its bias in favour of Israel for the sake of peace? There is no sign that it will. 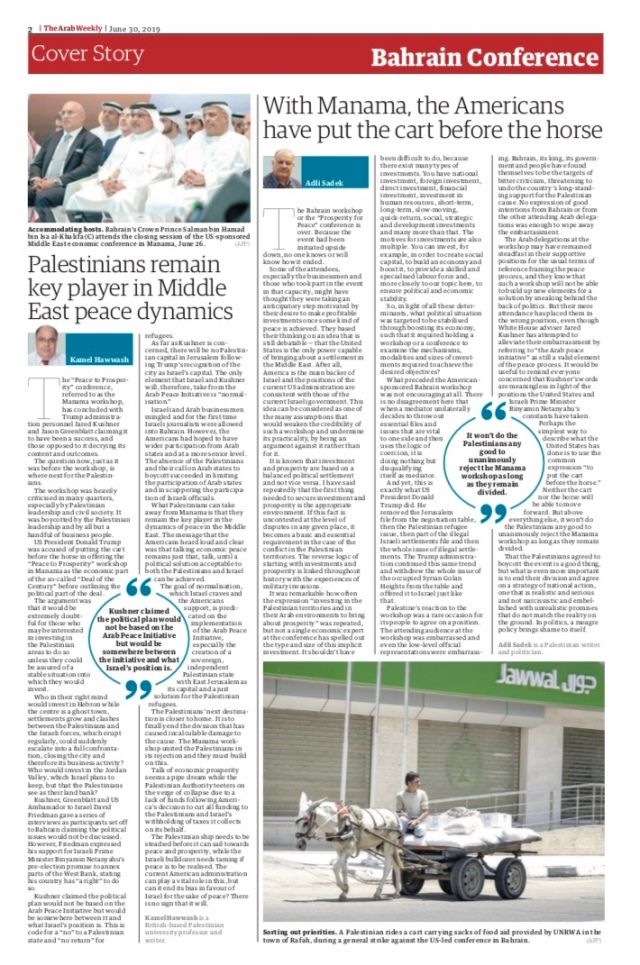