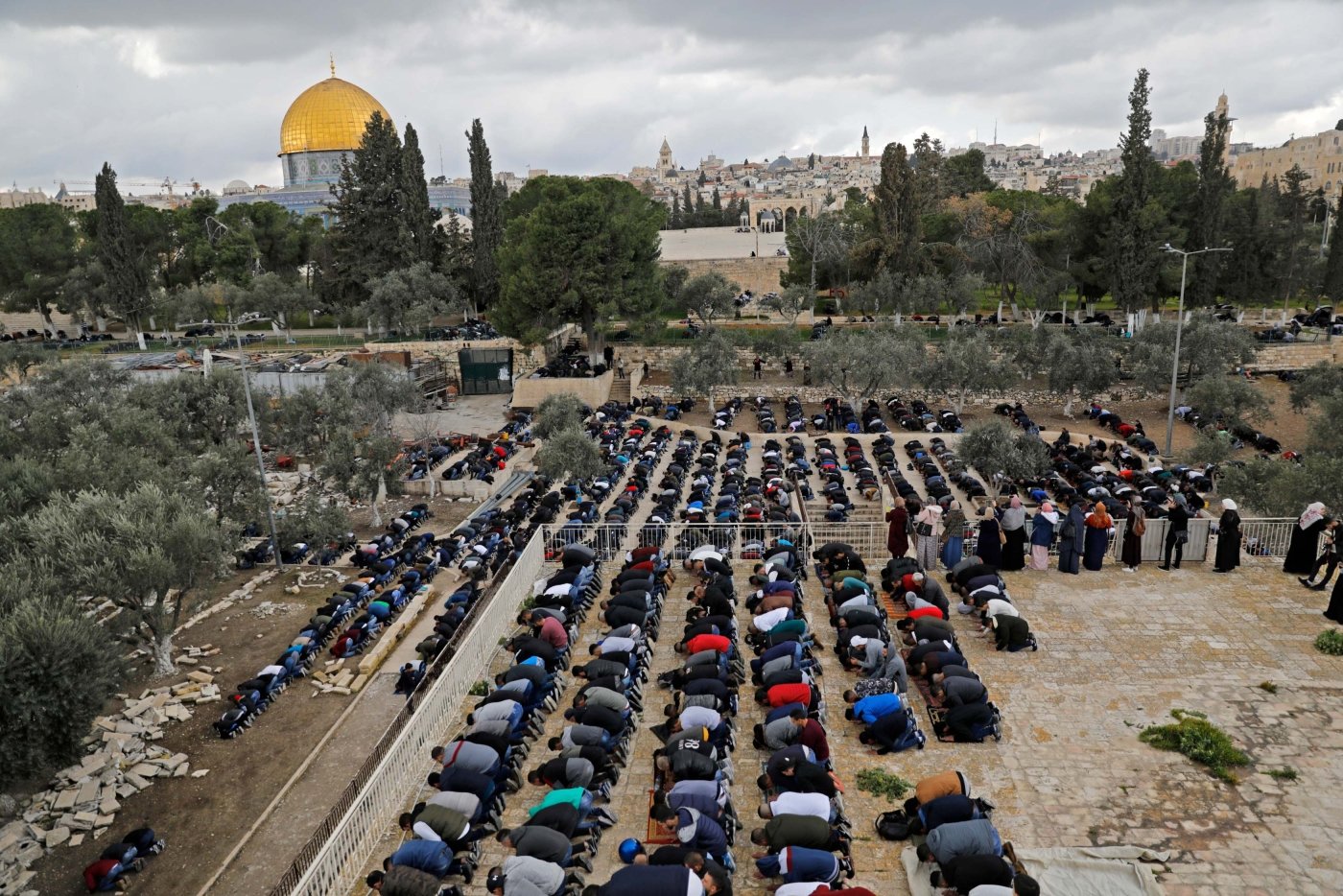 My parents are from the Arab Palestinian city of al-Quds, not Jerusalem. While I was not born there, my first visit was a year or two after it was occupied in 1967.

My early memories of al-Quds are of meeting family who spoke Arabic with the same accent and of playing with cousins. When I got a little older, I would be tasked with taking a dish down the hill to be filled with delicious hummus, and calling on the baker for bagels and fresh falafel. What a breakfast that was.

I remember walking through the Old City, through Damascus Gate, through the Arab souq and all the way to al-Aqsa Mosque to pray without impediment. I did not see any flags, Palestinian nor Israeli. I visited my family’s graves in the nearby cemetery, too. We have roots.

The occupation was not “in your face” in those days, as there were very few symbols of it. It seemed to be a “shy” occupation; perhaps the Israelis thought that it would not last.

Looking back now, I do not recall coming into contact with any Jews in that area. I remember that the Palestinians I interacted with resented the occupation, but hoped and believed it would end soon.

I broke down when I saw the Palestinian flag flying a short distance out from the border post, where only Israeli flags were flown

How wrong they were. Not only has the occupation been entrenched across the whole of the West Bank, but al-Quds has suffered exceptionally.

From day one, Israel had no plans to relinquish it for peace; it formally annexed it.

It set about changing the look and feel of the place through a series of policies and processes that would, over time, reduce its Arab Palestinian character and increase its Jewish character.

My visits to al-Quds ceased for some 25 years. I returned after the Oslo Accords were signed, and hopes were high. Armed with my British passport, I was greeted with “welcome to Israel”. I broke down when I saw the Palestinian flag flying a short distance out from the border post, where only Israeli flags were flown.

I so much wanted to get to al-Quds. The notorious Qalandia checkpoint was not a structure as it is now. The city was reachable by Palestinians, and certainly for me, as a British “tourist” in my homeland.

They tell you it is being Judaised at an alarming rate.

They ask how it is that those who came from outside Palestine have not only settled in their city, but now think it belongs to them and them alone. How can they call it their capital but deny us the right to call it our capital too?

They worry about al-Haram al-Sharif, home to al-Aqsa Mosque and the iconic, golden Dome of the Rock. They feel that the daily, unwelcome and provocative break-ins by Jewish settlers, protected by Israeli security forces, are meant to tell them that even the holy site is under threat of being divided or taken over.

They point to Silwan, a short walk from the southern wall of the holy sanctuary – a Palestinian neighbourhood that Israeli settlers have targeted for years, as they claim it to be in or near the “City of David”.

Its Palestinian population has suffered home demolitions for “lack of building permits,” and evictions as settler groups use underhanded, yet “legal” means to take their homes.

The demographic balance of Palestinians to Jewish settlers is being changed in favour of the settlers.

To add insult to injury, the municipality recently approved the naming of streets in this Palestinian Arab neighbourhood, not after Arab scholars, but after Jewish rabbis. This is part of a deliberate attempt to Judaise the area. Young Palestinians will grow up knowing the streets not by their Arab names, but by the Hebrew Jewish rabbi names. Illegal settlements have been planted in other Palestinian Arab areas.

Hundreds of thousands of illegal settlers now live in the occupied Palestinian territory. A large Israeli flag flies in Attur (the Mount of Olives), overlooking the holy sanctuary.

In March, the municipality posted notices, according to a local source, demanding that Palestinians stop all building work and visit its offices to discuss their possible “illegal” building, as most would have built without permits due to the city’s deliberate policy – over decades – of refusing them.

To control the demography of al-Quds, Israel built part of the separation wall to exclude a number of neighbourhoods – placing them outside the wall and making it easy to transfer the residents’ status to residing within Palestinian Authority areas.

Israel also forces a Palestinian from al-Quds who decides to marry a Palestinian from the West Bank or Gaza to either move out to be with their partner, or sneak them in “illegally,” making it difficult for them to live a normal family life. It does not provide Jewish Israelis with the same dilemma.

Israel has also cancelled thousands of residency permits for Palestinians from Jerusalem as another means of reducing its non-Jewish population.

Israel also interferes in the education of Palestinian children, feeding them its own narrative about the city and land they live in.

The indigenous Palestinians, Jews, Christians and Muslims who inhabited Palestine from the river to the sea at the turn of the last century, understand the significance of Jerusalem to millions around the world.

Those whose families – including mine – have lived in the city for centuries and are part of its fabric, whether Muslim or Christian, are not attempting to change its character.

This is what Israel is doing, and the process is accelerating, particularly under the biased US administration.

Instead of Judaising its Arab Palestinian part, Israel should work with Palestinians to jealously protect al-Quds’ diversity – for that is a major part of its appeal to the world.

Let the Christian bells ring and the Muslim adhan sound in its skies alongside Jewish prayer, and educate Jewish Israelis to accept that.

Telling them it is only “the Jewish people’s eternal undivided capital” is wrong. It belongs to the world.

Let it evolve naturally, as it has for centuries – and if you want to build a new Jewish Temple, build it away from al-Aqsa Mosque and the Church of the Holy Sepulchre.