Israel and the United States are trying to disappear Palestine and its people but the Palestinians will not agree to losing their collective identity.

The so-called Deal of the Century, or what US Special Representative for International Negotiations Jason Greenblatt referred to on Twitter as the “peace vision,” will not be released until after the second Israeli elections of the year September 17.

Elections earlier this year failed to bring a coalition government into being. Recent polls indicate the two main parties — Likud and the Blue and White alliance — are neck and neck at 30 seats each in the 120-seat Knesset.

This would make it difficult for either party to form a governing coalition. Israeli Prime Minister Binyamin Netanyahu’s political career is under a cloud of allegations of bribery, fraud and breach of trust.

Key issues to be discussed in the run-up to Election Day will not include the conflict with the Palestinians or the occupation of their territories. What Palestinian people, what conflict and what occupation?

Israel has for decades been trying to play down the conflict and is arguing that it is not at the heart of the wider Arab-Israeli conflict.

On the ground, there are Israeli and Palestinian areas and roads for Palestinians and others for settlers in the West Bank, that distinction is less clear on a modern map of the area. Official maps show the occupied West Bank as “Judea and Samaria,” while East Jerusalem is incorporated into Greater Jerusalem instead of the occupied West Bank. Increasingly, Israel is denying there is an occupation, preferring to use “disputed” territories.

The Israeli discourse has been adopted in full by the Trump administration. The US State Department removed the word “occupation” from its official documents. This began with the designation of the “Occupied Palestinian Territories” as “West Bank,” in its annual report on human rights across the world.

Journalist Aaron Magid tweeted that he noticed that the State Department “removed Palestinians completely from the Middle East. It used to be Palestinian territories or the Palestinian Authority. Now, Palestinians don’t exist.”

If the US administration is to be believed, then Israel does not occupy any Palestinian land or Syrian land, following US President Donald Trump’s recognition of Israeli sovereignty over what the rest of the world considers to be the illegally occupied Syrian Golan Heights.

In April, Greenblatt shared a map of Israel showing the Golan Heights as part of Israel. However, that map still showed the West Bank (excluding East Jerusalem) and Gaza shaded in a different colour than Israeli areas.

The US government is not committed to a two-state solution to the conflict. Speaking at the Washington Institute for Near East Policy last May, Trump’s special adviser Jared Kushner said: “If you say ‘two-state,’ it means one thing to the Israelis, it means one thing to the Palestinians. We said: ‘You know, let’s just not say it. Let’s just say, let’s work on the details of what this means.’”

Recently, 22 Israeli parliamentarians wrote to senior members of the US Congress explaining that a Palestinian state poses a greater threat to Israel than the Boycott, Divestment and Sanctions movement.

If there is no occupation, Jerusalem belongs to Israel, the Palestinian refugees are not refugees and there will be no state called Palestine. Then what can the peace vision bring?

Following the failure of the Manama workshop to change the dynamics, the Americans are clearly moving towards a political solution predicated on Israeli control of the whole land between the Mediterranean and the Jordan River.

Israel and the United States are trying to disappear Palestine and its people but the Palestinians will not agree to losing their collective identity. It is likely this will lead to instability and continuing violence, which will affect both Palestinians and Israelis.

If a Palestinian state were ruled out, how would Palestinians identify themselves and their children? Israel has been using the term “Arabs” to kill the individual Palestinian identity but Palestinians will remain proud of their homeland and will continue to struggle to attain their full rights as Palestinians in Palestine. 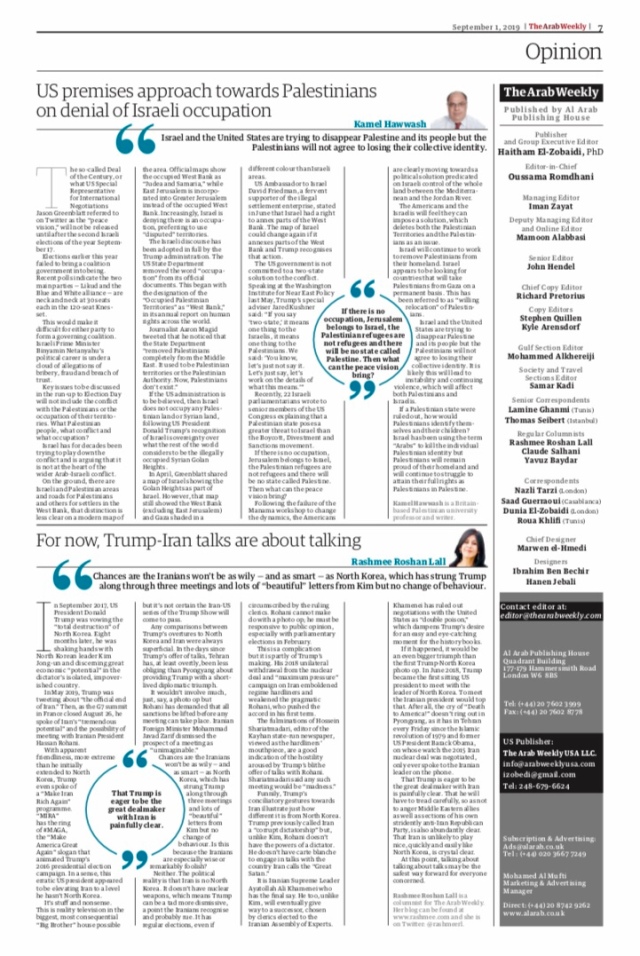