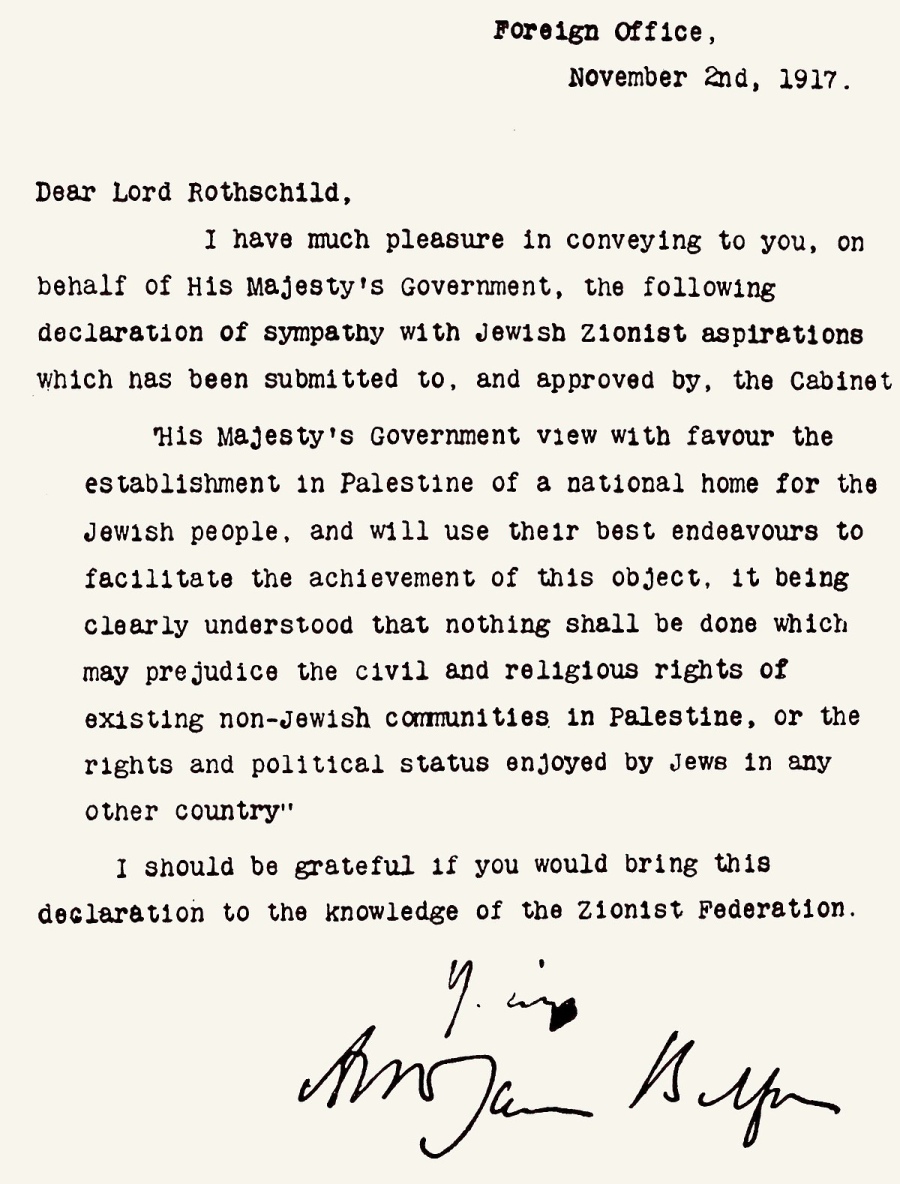 The British are famed for saying sorry when they’ve done wrong. Apologising for the Balfour Declaration would let Palestinians start reclaiming the narrative from the Israeli occupiers

Palestinians and their supporters around the world mark 15 May as the anniversary of the 1948 Nakba (Catastrophe). However, the Palestiniancatastrophe was set in motion in London’s Foreign and Commonwealth Office on 2 November 1917, when the Balfour Declaration was issued.

In it, British Foreign Secretary Arthur Balfour promised the Zionist Federation that his government “viewed with favour the establishment in Palestine of a national home for the Jewish people and would use their best endeavours to facilitate the achievement of this object”.

There was, of course, more to this short document, but Britain, which was not in occupation of Palestine, promised the land of the Palestinian people to another people who did not live there and had no right to it.

Britain could also have offered Wales to the Jews.

One hundred and four years on, and Britain has still not accepted its responsibility for the part it played in the abuse of Palestinian people’s rights in the leadup to the British mandate, and its deliberate facilitation of the establishment of a state for another people in their homeland.

When I first came to Britain in the 1970s, I learned quite a few sayings. One of them was that “an Englishman’s home is his castle”.

Clearly, the Zionist forces and the British occupiers did not apply the same sentiment to the Palestinians, as home after home was taken by Zionists and handed over to settlers. This continues to the day, as Israel regularly demolishes Palestinian houses for lack of building permits and expels others from their homes, the threatened expulsions in East Jerusalem’s Sheikh Jarrah being just the latest example.

The other saying, or maybe it is just a game, is “let’s pretend”.

Well, on 2 November 2021, let’s pretend what might have happened had the Balfour Declaration not been issued. I will of course need to be creative here, but why not?

During the British and French mandates, there was no migration from outside the areas they ruled. When the mandate ended, the people of the land became independent, forming Jordan, Iraq, Syria and Lebanon.

A snapshot of what it looked like in 1920 can be seen in this Al Jazeera documentary. A quick search of the internet produces video after video and photograph after photograph of Palestine before 1948 and confirms its potential to be that powerhouse.

There would be no occupation

Had the Balfour Declaration not led to the creation of Israel, the neighbouring countries that became independent would have continued to develop as countries for Muslims, Christians and Jews. They and Palestine would have been far more peaceful nations and there would not have been the need for resistance groups in Palestine to counter the attempt to take more of their homes and lands.

The resources that the land of Palestine embraced – whether water, gas or other minerals – would have belonged to the Palestinians in their homeland. Instead, the settlers now control them and charge the indigenous Palestinians to use them.

It may have started with the Zionist movement targeting Palestine for their homeland, but Britain played a pivotal – and, from the viewpoint of the Palestinians, a shameful – role in what happened to them during the British mandate and since.

The resources the land of Palestine embraced would have belonged to the Palestinians in their homeland. Instead, the settlers now control them

Britain has failed to take responsibility for denyingthe Palestinians the future that other peoples who became independent at the end of its mandate achieved. It even had the temerity to celebrate the centenary of Balfour, with a special gala dinner that former Israeli Prime Minister Benjamin Netanyahu attended in London. Then-British Prime Minister Theresa May said that Britain was “proud of our pioneering role in the creation of the state of Israel”.

May went on to say: “But as we work together towards Balfour’s vision of a peaceful coexistence, we must be equally clear that there can never be any excuses for boycotts, divestment or sanctions: they are unacceptable and this government will have no truck with those who subscribe to them.”

What should the Palestinians do to expose the role of Britain in their continuing Nakba?

In a recent column in Middle East Eye, Professor Joseph Massad argued that Palestinians deserved reparations for Britain’s colonial crimes. I agree with him. But he also referred to the case being brought by Palestinian billionaire Munib Masri to force an apology from Britain 104 years on.

Massad does not believe Masri’s case goes far enough. I take a different view. Sitting with a group of Palestinians Masri addressed on a recent visit to London, it was clear that there was unanimity that Palestinians would support his case and, with careful planning, could bring not only Palestinians around the world behind the case but also their supporters in Britain.

The case would provide an opportunity for Palestinians who, while still enjoying a high level of support in Britain, are aware of attempts by pro-Israel groups to silence them and their supporters.

Israel would like to claim that the conflict with the Palestinians started with the first attacks by Palestinian guerillas in the early 1970s following the 1967 war and occupation of East Jerusalem.

The Masri case would give Palestinians the opportunity to reclaim the narrative and at the same time remind Britons of the role their country played – and continues to play – in strengthening Israel and allowing the Palestinians to be sacrificed to ensure Israel’s security.

As Palestinians stand outside British embassies in 10 European countries on 2 November, a coordinated effort is needed to maximise the promotion of the benefits of the Masri case.

There is surely no need for a case to be brought to force Britain to issue an apology.

Boris Johnson, who described the Balfour Declaration as “an exquisite piece of Foreign Office fudgerama”, could surely find the sincerity and remorse to apologise for Britain’s role in the century-long suffering of the Palestinian people.

One thought on “Yes, Palestinians must get reparations from the British. But an apology is vital too”