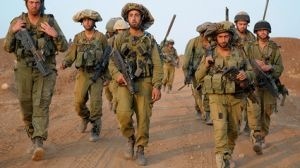 The online Israeli news website Ynet, reported that IDF ombudsman report reveals abuse of power among commanders . It reports “A career soldier who poured bleach on another soldier’s head, an officer who checked his soldiers’ body wastes, a commander who forced soldiers to drink until they vomitted and an army doctor who told a recruit to “commit suicide”. These are just a few of the thousands of complaints made to IDF Complaints Commissioner, Maj.-Gen. (ret.) Yitzhak Brick.”

This shatters the claim often made by the IDF and supporters of Israel of its morality. An army that does this to its own citizens can do worse to the people it’s is charged with oppressing, the Palestinians. On Nakba day it killed two young Palestinians in cold blood. CCTV footage showed the two youngsters fall after bring shot. They did not seem to be posing any danger to the IDF. Instead of conducting a serious investigation, the IDF claimed the CCTV was possibly forgery.

Presumably they have their own CCTV footage that they could broadcast but they gave not. It us worth remembering that when Jordanian judge, Zueiter was murdered at close range at the Allenby bridge, the UDF claimed he attacked one if their members with a weapon and shouted Alkahuakbar. Eyewitnesses denied this. But the IDF also claimed the CCTV cameras were not working on the day. Coincidence?

An army which mistreats its own citizens dis worse to the helpless Palestinians its occupies. Morality and the IDF are worlds apart. The PA should expedite its membership if the International Criminal Court. Let yS have these thugs locked up.