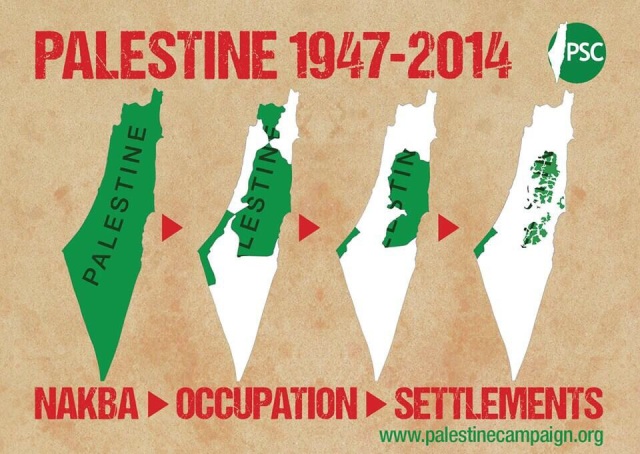 Not a day passes without Israel doing something or planning something that angers me. The most recent revelation was reported by Amira Hass in Haaretz yesterday, 21 May. IDF uses live-fire zones to expel Palestinians from areas of West Bank, officer admits. I sat back and wondered what kind of a state does this to a peaceful, proud people.

The answer is a colonialist, racist, ethnic cleansing, occupying, Apartheid state. The above story covers all these bases.

While I remain astonished that the so called western powers cannot see Israel for what it is, I am heartened that ordinary citizens do. BDS is a peaceful, legitimate means of applying pressure to effect change. Israel is facing increasing isolation, which it brings on itself.

At the end of May we commemorate Israel’s attack on the Flotilla which sailed to break the siege on Gaza. This is a reminder of the kind of thuggery the Palestinian people face on a daily basis. If it isn’t physical violent force in the West Bank or house evictions in Jerusalem then it is racist Laws directed at Palestinian citizens if Israel. The Palestinian leadership should be actively seeking all legal means to end Israel’s impunity. When Israeli leaders fear they could be held personally responsible for their crimes they will begin to hesitate before acting in a criminal manner.

To anyone reading this who thinks it is too strong, I say, why not invite Israel to occupy your homeland and after 66 years let us compare notes.