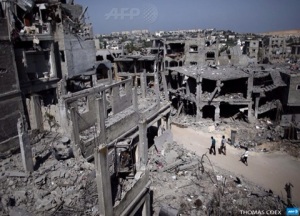 Gaza after Israeli knock on the door

2014 has been a highly tense and significant year in the quest for a solution to the Palestinian / Israeli problem. It started with the then ongoing ‘peace talks’. They ended in failure because Israel had no intention of concluding a deal. The summer months saw deaths in the West Bank and then a most brutal attack on Gaza which left over 2,000 Palestinians dead, thousands injured and hundreds of thousands displaced. Israel argued this was all in self defense and many Western Governments agreed. However, ordinary people around the World saw the attack for what it was an act of state terrorism and went out in their millions onto the streets of capitals an major cities all over the World, united in their condemnation of Israel and their solidarity with the Palestinian people. 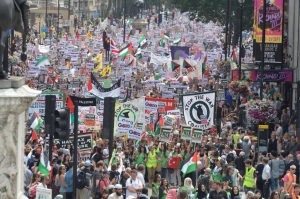 A huge London demonstrations for Gaza

The ceasefire , when it came in August offered much hope for not only an end to fighting but a lifting of the appalling, immoral siege on Gaza. But in true brutal occupier style, Israel has in fact tightened it further and has not allowed sufficient flow of materials and equipment to begin the desperately needed reconstruction of Gaza. Egypt has unfortunately joined the blockade and has implemented a buffer zone in Rafah along the border to end the use of smuggling tunnels, the lifeline of Gaza, once and for all. 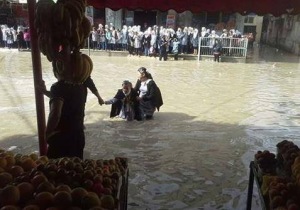 Just prior to the escalation of violence in the summer a Government of of National agreement was formed by the Palestinians which was welcomed by the people but never really functioned. Violence in the Sinai coupled with mistrust between the Egyptian leadership and Hamas with constant closure of the Rafah crossing, left the Government in a state of limbo. That continues to this day.

But 2014 also saw a wave of recognition of the State of Palestine. First, it was Sweden. This remains the only formal recognition. However, Parliaments passed motions asking their Governments to recognize Palestine in Britain, Ireland, France, Spain and others will follow suit. While non binding, the decisions reflect the will of the people. But significantly, the debates themselves highlighted the change in attitude towards Israel and its policies. There is no doubt that illegal settlement building during the ‘peace talks’ and since and land grabs have moved even the staunchest of supporters of Israel to question whether Israel is really interested in peace. 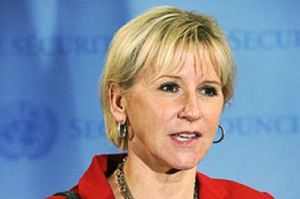 It is interesting that what solidarity groups have been saying for decades about settlement building in particular is now main stream, not only among parties of the left but even the right, such as the Conservatives in Britain. The prominent Conservative MP Sir Alan Duncan has called those that support illegal settlements ‘extremists’, and of course he is right. How can the UK say settlements are illegal in one breath and then continue to trade with the state which is committing an illegal act? 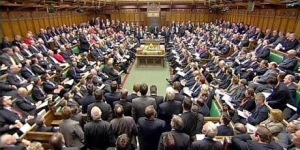 While Parliaments have debated and passed motions to recognize Palestine, people were asking both during the attack on Gaza and since then, what individuals can do to help bring about an end to the abuses of the human rights of the Palestinians. The answer has been three fold. Firstly put pressure on your political representatives to pressure Governments to sanction Israel and to end arms trade with it. Secondly take part in the growing BDS campaign until Israel abides by International Law, ends the occupation and welcomes Palestinian refugees back to their homes. Thirdly, visit Palestine / Israel and see the situation for your self.

There is little doubt that the BDS movement is growing and while the B (Boycott) and D (Divestment) are growing, the S (Sanctions) has some where to go. However, it was reported only yesterday that President Obama has instructed his officials to consider what, apart from condemnation, can be done in the way of halting increased settlement building. The EU is also considering ways of putting more pressure on Israel to halt its settlement expansion policy.

The past few weeks have seen an escalation of tensions in Jeruslam for which the Israeli leadership is responsible. Its acquiescence to repeated incursions by extremists including legislators onto the Haram Alsharif (AlAqsa) have been as incitement by Palestinians and a prelude to a policy to divide the mosque. This incitement and a raised level of oppression led to attacks and counter attacks on civilians during the past few weeks. The situation is still extremely tense and could morph into a third intifada unless Palestinian grievances are dealt with. 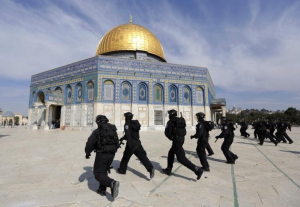 Now throw into the mix Israeli elections and we could be approaching a period of intense instability not seen before now. Prime Minister Netanyahu finally succumbed to the ever increasing attacks on him and what he perceived as disloyalty in Government ranks. His popularity has plummeted and it seems he cannot rust anyone to toe the line. He also had to make two trips to Jordan one of only two Arab countries with which Israel has a peace treaty to reassure the King that there would be no change to the status quo at AlAqsa. Netanyahu who enjoyed a number of years batting of his his front foot seems to be on the back foot both at home and abroad, a situation he does not like. 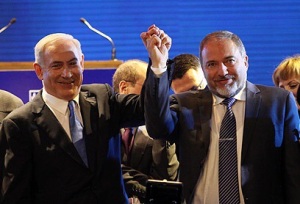 The Israeli public is not presented with real options in the coming elections. In relations to peace with Palestinians they have a choice between annexation of occupied territory and a prolonged occupation. There is no party or leader that has put forward a coherent policy that say accepts the Arab peace initiative, agrees to ending the occupation and to the uprooting of settlers and the IDF from the West Bank. No one is talking about East Jerusalem as a genuine capital of Palestine. There is no Ghandi or Mandela. 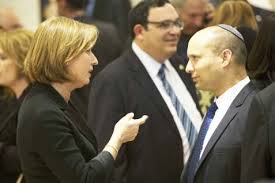 The various leaders are also oblivious to the growing isolation of Israel and the growing BDS. They feel they can still rely on the US for unquestioned support and on Western Governments to block BDS in their countries. But they are deluding themselves. The movement is growing and with every success other successes seem closer to realization. 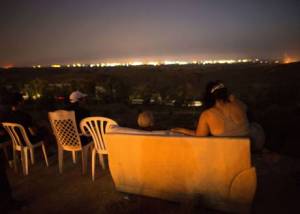 Israeli society has moved to the right, to intolerance, racism and an acceptance of Apartheid-like policies towards the Palestinians. Their political and religious leaders are leading them to an ostrich farm life, full of sand for them to bury their heads in, in their millions. When they eventually manage to remove their heads from the sand, they will wish they had never occupied the Palestinians. Their isolation will lead them to turn to the Palestinians to help them end their isolation. They will find the Palestinains a very reasonable and tolerant people, far more tolerant than they have been to them.