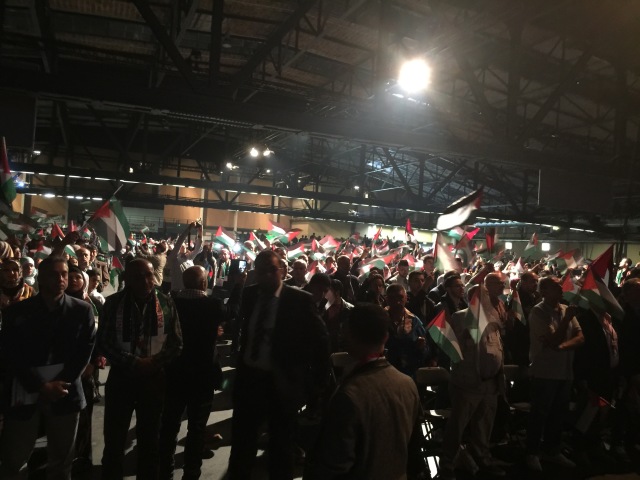 I spent the day (25 April, 2015) at the 13th Palestinians in Europe Conference in Berlin, Germany. This was my first experience of this major event. The organisers informed us that over 10,000, mostly Palestinians, had attended the day long event.

The conference was jointly organised by the Palestinian Community of Germany and the UK based Palestinian Return Centre (PRC).

The ‘Jewish Community’ in Germany and pro Israel groups had lobbied for the Conference to be banned. Calling themselves ‘Berlin against Hamas’ the group planned to picket the Conference. I must say that I saw no protest and did not hear of a protest.

Calling the conference a pro-Hamas event is way off the mark. I attended most of it, listened to the speeches and enjoyed the Palestinian culture offered through music, sing and dance by young Palestinian groups from across Europe.

In my view the ‘Berlin Against Hamas Group’ are an extremist group that is against legal Palestinian rights, and for the continuation of Israel breaking of International Law. They are therefore holding the lowest moral ground possible.

Their frustration is that the Palestinians are organised, the communities across Europe are connected and that Palestinians just will not go away.

The Conference received a speech by President Erdogan of Turkey, delivered on his behalf, which supported Palestinian rights. He called on countries that do not currently recognise Palestine to do so with East Jerusalem as its capital.

Dr Mustafa Barghouthi, General Secretary of the Palestinian Initiative and a member of the Palestinian Legeslative Council addressed the meeting. He is certainly no extremist. He called for unity and reminded the conference that the Palestinians are still here fighting for their rights and especially for their freedom. “Oslo was dead”, he claimed, “Israel has killed it”. He called for an escalation of the popular, peaceful resistance against the occupation and called on Palestinians in Europe to support the Boycott, Divestment and Sanctions (BDS) movement. He also called on Palestinians with European passports to visit Palestine, to connect and to support.

Parliamentarians from the UK, Ireland, and Germany addressed the conference as did the Justice  Minister of Morocco.

Amongst the audience were Palestinian refugees from Yarmouk refugee camp in Syria. Their plight and that of those that remain was uppermost in the minds of speakers and attendees.  When the speech of the Palestinian Ambassador to Germany was delivered by a representative, he was heckled. This was an expression of anger at the perceived lack of action by the Palestinian Authority to end the suffering of Yarmouk. The speaker delivered the speech and left immediately.

During the conference news was received of the murder by the Israeli IDF of a Palestinian teenager in Jerusalem and then another in Hebron. Both reminders of the deadly oppression the Palestinians live under  on a daily basis.

Historically, this Conference has been organised by Palestinians not aligned with Fatah or the PA. However, my overall impression was that while this was the case here, it was a very welcoming event for all Palestinians in Europe and indeed from refugee camps all over the world.

It provides, a now annual focus, for Palestinians from different countries in Europe to meet and connect. The sight of troup after troup of young Palestinians, most of whom had never been to Palestine performing the Dabka, brought tears to my eyes. They know their roots and Palestinian culture lives on. They will pass it to their children. The conference primarily reaffirms the Palestinian people’s absolute determination to exercise their Right of Return. 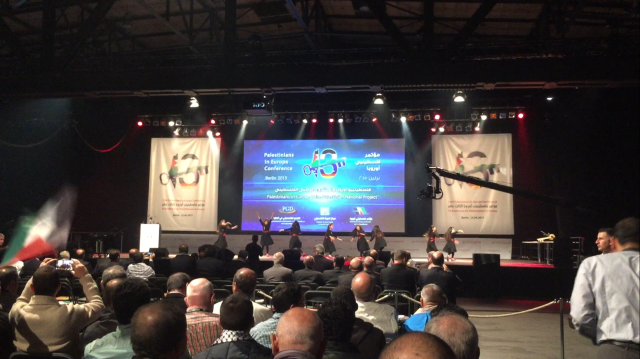 David Ben Gorion is alleged to have said of Palestinian refugees “the old will die and the young will forget’. That the old would die was inevitable but the 13th Palestinians in Europe Conference shows unequivocally, that the young have not forgotten. He will be turning in his grave.

The Jerusalem Post reports that the ‘Berlin Against Hamas’ Group held a protest outside the venue. In it there is a reference to BDS being a pro Hamas movement. This is a complete lie. The BDS call came from over one hundred civil society organisations in Palestine. Support for it is support for Palestinuan rights and sgainst Israeli occupation and oppression.