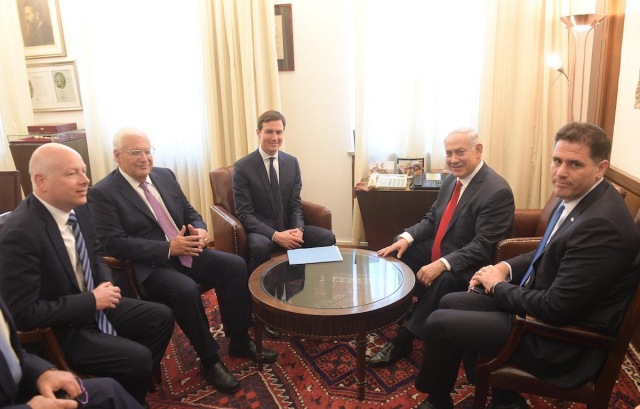 Throughout his first trip abroad as US president, during which he visited Israel and the occupied Palestinian territories, Donald Trump expressed his desire to bring peace to the region. It would be, he said, the “ultimate deal.”

He promised Palestinian Authority President Mahmoud Abbas: “We want to create peace between Israel and the Palestinians. We will get it done. We will be working so hard to get it done.”

In order to put the “ultimate deal” together, it is reasonable to expect that a team with knowledge of both sides of the conflict would be gathered together to determine the facts and the rhetoric before a truly honest broker could succeed in the task. No such attempt at balance was made during Trump’s election campaign; his Middle East adviser then was Walid Phares, who is of Lebanese Christian Maronite heritage and well-known for his pro-Israel position. Trump had no adviser on his team who could provide a pro-Palestinian perspective.

As president, we now see that the team that Trump has put together to launch another attempt at a peace deal between Israel and the Palestinians not only lacks any balance whatsoever, but is also tilted entirely in Israel’s favour.

Trump’s senior adviser on the Middle East, his son-in-law Jared Kushner, recently returned to the US after a 15-hour trip to the Holy Land during which he met with Israeli Prime Minister Benjamin Netanyahu and the PA’s Abbas. The photograph circulated of his meeting with Netanyahu is a revealing snapshot of the team planning to launch Trump’s new peace initiative; every picture tells a story, and this one is no different.

Kushner himself is an orthodox Jew and the son of Holocaust survivors. The real estate developer’s family has donated tens of thousands of dollars to the illegal West Bank settlement of Bet El. He started his visit in his new role as Trump’s “senior adviser” by offering condolences to the family of Israeli police officer Hadas Malka who died during an attack by Palestinians recently. Although he would have a much longer list to choose from, he did not seek out the family of any Palestinian killed by Israel to show that he understood the suffering on both sides.

In the picture too is Trump’s special representative for international negotiations, Jason Greenblatt. Trump’s company lawyer from New York is also an orthodox Jew. He does not see Israeli settlements as an obstacle to peace and does not think that the United States or any other party should try to impose an agreement on Israel. In a recent visit to the Zionist state, Greenblatt met with leaders of the settlement movement, including the Yesha leaders Oded Revivi and Yossi Dagan. 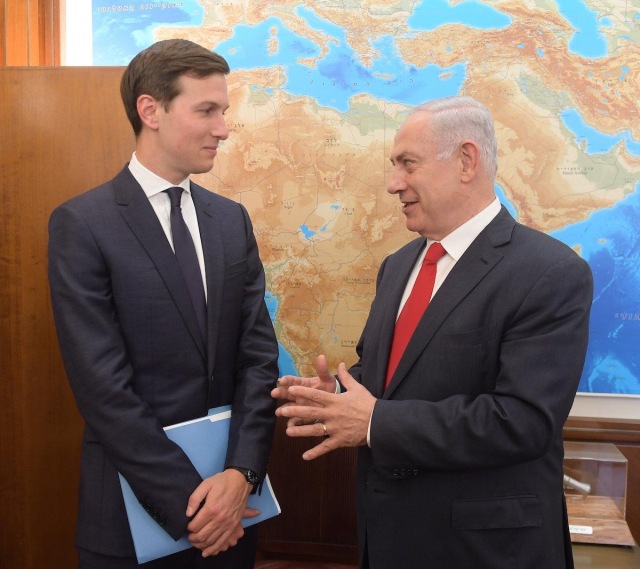 The final member of the US trio in the official photograph is David Friedman, Trump’s pick as ambassador to Israel; an orthodox Jew and bankruptcy lawyer, Friedman is also committed to the settlement enterprise and advocates moving the US Embassy from Tel Aviv to Jerusalem in contravention of international law. Like Kushner, he has close ties with the illegal West Bank settlement of Beit El. Indeed, Friedman heads Friends of Beit El Institutions, an organisation which recently funded a five-story block in the Israeli colony built on occupied Palestinian territory. Friedman does not believe that the colony-settlements are an impediment to peace or that annexing the West Bank would compromise Israel’s Jewish or democratic character.

Representing Israel in the picture is Prime Minister Benjamin Netanyahu, a man who has led the far-right Israeli government for a total of 13 years, alongside Israel’s US-born ambassador in Washington, Ron Dermer, who has been in post for the past 4 years. During the 2015 Israeli election campaign Netanyahu promised that there would be no Palestinian state on his watch; he now insists that Israel must keep security control “west of the River Jordan” in any peace deal. He was prime minister during the 2014 Israeli military offensive against Gaza in which over 2,000 Palestinian civilians, including more than 350 children, were killed.

Everyone in the picture of Kushner’s meeting with Netanyahu is a Zionist Jew; not a single American of Palestinian origin or US advisor with even slightly less partisan views, never mind pro-Palestinian. Of course, I do not wish to imply that Jews cannot help deliver a peace deal between the Palestinians and the Israelis — there are many who are active in the peace movement — but it is difficult to see how Zionist Americans, whether Jewish or not, can be even-handed in their endeavours to get the “ultimate deal”.

Anyone looking among Trump’s team for some counterbalance to the pro-Israel views championed by Kushner, Greenblatt or Friedman will be sorely disappointed. Another of the president’s senior appointments is US ambassador to the UN Nikki Hayley; it is hardly surprising that she is a staunch supporter of Israel who has criticised the international body for being “biased” in its criticism of Israel’s illegal activities. She recently promised the American Israel Public Affairs Committee (AIPAC) — the main pro-Israel lobby group in Washington — that “the days of Israel bashing [at the UN] are over.”

Hayley went to Israel in between the Trump and Kushner visits, providing Netanyahu with an opportunity to heap praise upon her and her boss. “President Trump and you, I think, have changed the discourse, have drawn new standards, and everybody’s taking up, and that’s great,” Netanyahu gushed. “Again, I felt that the UN would collapse, you know, that whole scaffolding of lies would just collapse. I think you’ve put in that simple word, truth.”

The “truth” is that with a blatantly pro-Israel team in place who believe in Israeli settlements but are not committed even to the concept of two states, the Palestinians cannot rely on the US to act as an honest broker and deliver peace.

It was, therefore, bewildering — though not, perhaps, surprising — to hear one of Mahmoud Abbas’s top advisers express the PA’s anger at a new illegal settlement being built. “[This is] a serious escalation, an attempt to thwart the efforts of the US administration and to frustrate the efforts of US President Donald Trump,” claimed Nabil Abu Rudeineh, as if this would generate some reaction from Washington. It has not and will not. With Kushner et al calling the shots, how could it?

The Palestinian leadership is in a real bind, mostly of its own making. This goes back several years, particularly since Abbas took over and pinned his colours solely to the mast of the “peace process” with Israel bereft of any reference to international law and under US patronage. It is blindingly obvious that America will always side with Israel and if pressure is ever exerted on anyone, it will be on the Palestinians to make yet more concessions.

To add to Palestinian woes, Trump has further succeeded in driving a real wedge between those Arab states that remain intact and the Palestinian cause. At the recent Arab League summit in Amman, Abbas looked isolated and had to work hard simply to ensure that the Arab peace plan was not watered down further to offer Israel more incentive to take it seriously. He then learnt that some Gulf States are considering partial normalisation with Israel in advance of a peace deal, which runs contrary to the Arab initiative.

The Palestinians need to accept that the strategy adopted by the PA has failed to deliver peace or even get the siege of Gaza lifted to alleviate the daily suffering of two million people. If any progress is to be made, the PLO and its institutions must be rebuilt and the Palestinians within and beyond historic Palestine have to be reconnected, working together for the same objective of achieving justice, freedom and equality. The Palestinians must rely on themselves for a change; relying on Trump’s team to deliver justice or anything but capitulation is preposterous.