You have to take your hat off to Mahmoud Abbas, President of the Palestinain Authority and Chairman of both the Palestine Liberation Organisation and Fatah. That is if you live long enough to recover from repeated heart attacks and strokes his unbelievable comments can give you. The man is a master of causing Palestinain jaws to drop. “Did he really say that ya Zalameh (Man)? Generally the answer is yes and we can’t believe it.

His most recent jaw dropping moment came when he made a statement in Jeddah in which he did the supposedly human thing of saying the settlers taken last week “have families” and should be freed to return to them.

Contrast this with Netanyahu who laid all the blame at his door. He blamed the abduction on the new Unity government, even though it is only days old and has absolutely no teeth. In addition, even if Hamas is behind this, it has hardly moved a battalion of fighters to the West Bank that committed this. Abbas called on the abductors to free the settlers and said “they have families like us and they should be returned to them”. He also rejected another of Abbas’s jaw dropping comments when he renounced his right to return to his hometown, Safad. To Palestinians both comments were seen as betrayal, particularly as the #IDF is currently undertaking a major military operation over the whole of the West Bank, not just Hebron where the settlers were abducted.

Abbas has now met hundreds of Israelis young and old in his headquarters to explain his vision to them. Netanyahu has not applauded this or reciprocated by holding similar meetings with Palestinians. 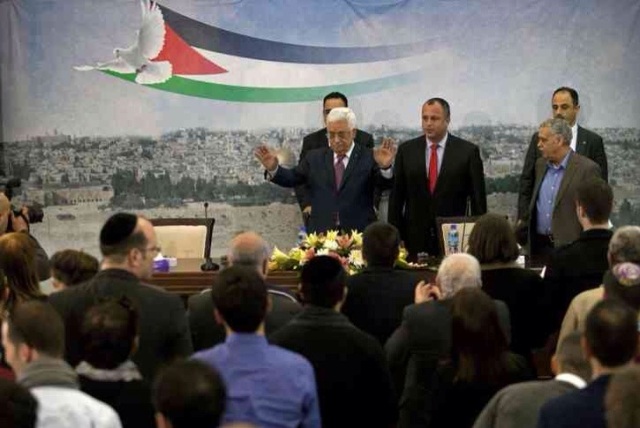 So does Abbas appearing genuine, reaching out to Israelis and saying the human thing and meaning it helps the Palestinains? Well, show me the evidence and I will shut up. The reality is that it has not changed one iota of Netanyahu’s rhetoric or the political elite’s attitude towards him or the Palestinians. They just do not believe him or the Palestinains. However, some argue that this may gain him more respect by the International Community. It may do but it is worthless. It is important to note that neither Kerry nor Hague condemned the murder of two Palestinain youth on Nakba day but they were quick to condemn the ‘abduction’ of Israeli settlers and called in Abbas to do everything he can to free them.

So Mr President, don’t give Netanyahu more opportunities to belittle you for nothing. No more jaw dropping statements or positions, we can’t drop any further. Stand for the Palestinians and you gain everything.