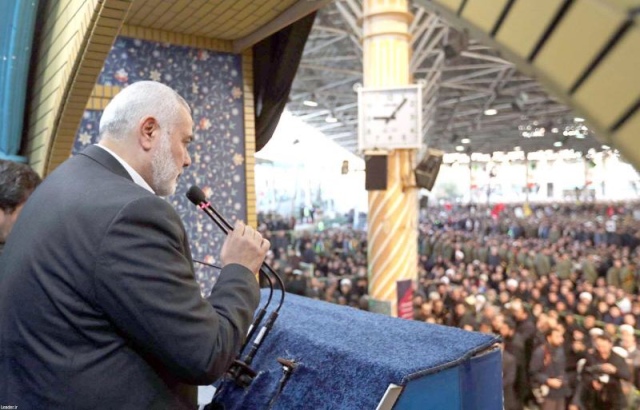 The assassination of Qassem Soleimani, commander of Iran’s elite al-Quds Force, on orders of US President Donald Trump, brought mixed reactions in the Palestinian territories and Israel.

Israel was, as expected, welcoming. Israeli Prime Minister Binyamin Netanyahu said that “just as Israel has the right of self-defence, the United States has exactly the same right. Soleimani is responsible for the death of American citizens and many other innocent people. He was planning more such attacks. President Trump deserves all the credit for acting swiftly, forcefully and decisively. Israel stands with the United States in its just struggle for peace, security and self-defence.”

With Netanyahu facing charges of fraud and bribery as he fights for his political future in the forthcoming Israeli elections, Trump gifted him the possibility of a war between the United States and Iran, which he could use to sell himself as the strongman needed to counter the fallout from that threat. He normally uses Gaza or the West Bank as punching bags to stoke fears in the Israeli electorate.

Netanyahu did distance Israel from the action in Iraq by saying that “the assassination of Soleimani isn’t an Israeli event but an American event. We were not involved and should not be dragged into it,” he was quoted as saying in Israeli news outlets.

Reactions in Palestinian areas were split. The Palestinian Authority and Fatah did not issue official notices. The only reaction came from Abbas Zaki, a member of Fatah’s Central Committee, who claimed that the killing of Soleimani would have dire consequences for the region and for the United States.

Hamas and Islamic Jihad, which for many years have been supported by Iran, saw things differently.

Hamas issued a statement expressing sorrow at Soleimani’s death and stressing that he had strongly supported the “Palestinian resistance.” Hamas condemned the “ongoing crimes” by the United States and the tension it caused in the region in service to Israel.

Hamas Chairman Ismail Haniyeh joined tens of thousands of Iranians at Soleimani’s funeral, declaring him “a martyr of Jerusalem.”

“We came from Palestine to comfort [Iranian] Supreme Leader Ayatollah Ali Khamenei and the Iranian nation for the fall of commander Soleimani,” he said. “The assassination requires condemnation from all over the world.

“Opposition to US and Israeli policies is not weakened but will continue as we are strengthened in our principles and in our faith in the liberation of Jerusalem.”

Islamic Jihad, the organisation most affiliated with Iran, expressed great sorrow at Soleimani’s death. Abu Hamza, spokesman for Islamic Jihad’s military wing, said that for two decades Soleimani had supervised Iran’s direct support for the Palestinians and the provision of military and security expertise for their fighters.

Other Palestinian factions expressed sorrow and acknowledged Iran’s support for the resistance against Israel. The Popular Front for the Liberation of Palestine condemned the killing and acknowledged Soleimani’s “proactive and prominent role in embodying the position of the Islamic Republic of Iran by supporting the Palestinian people’s just struggle against the Zionist entity, supporting the resistance forces and developing their capabilities.”

On the Palestinian street, there was condemnation of Soleimani’s assassination but also condemnation of him as a man with the blood of thousands of Iraqis, Lebanese and Syrians on his hands. Those who expressed the latter view objected to Soleimani’s and Iran’s support, as well as that of their proxies, in shoring up the Syrian regime, resulting in the death of hundreds of thousands of civilians.

At the official level, the reaction to Soleimani’s death highlighted the problem the Palestinian factions have, however large or small, in taking an independent stance when they know they rely on political support as well as financial and military support from external actors.

The Palestinian Authority, whose funding comes mostly from the European Union and Gulf countries, must measure its positions largely in line with that consideration to ensure political and financial support. Equally, factions supported by Iran and countries friendly to it are sensitive to that reality in taking positions on issues that divide the world into two camps.

It is possible to conclude from observing official and non-official positions in the Palestinian territories and Israel that there is fear of an escalation that could start an all-out war between the Americans and the Iranians.

While Trump and Iran seem to have expressed a similar position that the assassination and retaliatory rocket attack on a US base in Iraq, which caused no casualties, could diffuse the situation, Trump once again talked up further sanctions against Iran, while the Iranians declared their goal to be the removal of US military presence in the Middle East.

While this current battle appears to be over, the prospects for war are not. 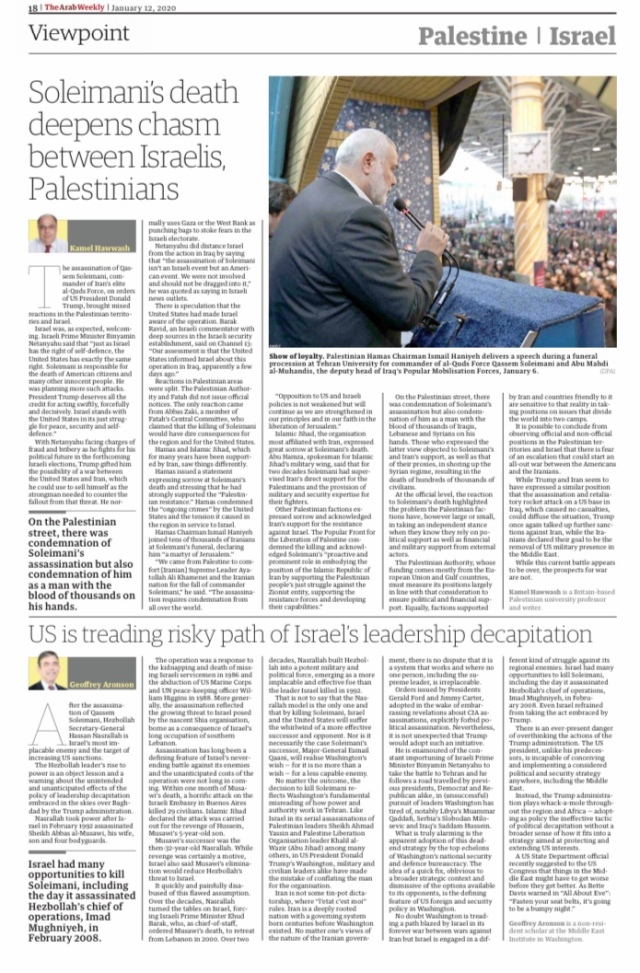