Netanyahu has indicated that he would use the gathering of world leaders in Jerusalem to urge that they impose sanctions on the ICC.

Last September, Israeli Prime Minister Binyamin Netanyahu stood in front of a map of the illegally occupied West Bank and announced that, if elected again, he would annex the Jordan Valley and the northern Dead Sea through the application of Israeli law to the areas in question.

His main rival in the elections and leader of the Blue and White alliance, Benny Gantz, did not condemn Netanyahu’s promise. Rather, he claimed it was his idea.

As 40 world leaders headed to Jerusalem to mark the 75th anniversary of the liberation of Auschwitz and to participate in the World Holocaust Forum, Netanyahu announced he would apply Israeli law to the Jordan Valley and every Israeli settlement in the West Bank “without exception.”

His statement at the start of Likud’s campaign was a response to Gantz’s announcement that he would extend Israeli sovereignty to the Jordan Valley “in coordination with the international community.”

Netanyahu challenged Gantz to vote in support of any proposal for annexation if it was brought to the Knesset before the elections but the latter would not be drawn in. He instead challenged Netanyahu to “try for once not to lie and here’s a tip — you can apply Israeli law in the Jordan Valley in a cabinet decision within two hours, without any Knesset discussion.”

In this, he was emphasising the need for the international community’s approval of the move.

Neither of the two leaders explained how this would contribute to peace but seemed to assume their plans would not be rebuffed by an American president who has recognised Israel’s annexations of East Jerusalem and the Golan Heights. US Secretary of State Mike Pompeo added that “the establishment of Israeli civilian settlements in the West Bank is not per se inconsistent with international law.”

The path appears open for American recognition of further Israeli annexation of illegally occupied Palestinian land. If such recognition is not already in US President Donald Trump’s much-touted Deal of the Century, then the almost unanimous agreement by Israel’s largest two parties may well lead to its inclusion.

It is almost certain that Netanyahu and Gantz would be selling the idea to Trump’s son-in-law and adviser, Jared Kushner, when he lands in Israel. Both have a strong advocate for this in US Ambassador to Israel David Friedman, a settler supporter. Friedman last summer said: “I think Israel has the right to retain some, but unlikely all, of the West Bank.”

Another politician using action in the Jordan Valley to rally support in the elections is Israeli Defence Minister Naftali Bennett. Not only is he in favour of the annexation of this important area, he announced the creation of seven nature reserves in Area C, which makes up 60% of the West Bank. This form of land theft — since it includes private Palestinian land — would prohibit Palestinians from building on or cultivating in those areas.

Bennett was quoted as saying: “Today we provide a big boost for the land of Israel and will continue to develop the Jewish communities in Area C with actions, not with words. I invite all the citizens of Israel to tour and walk the land, to come to [the West Bank], sight-see, discover and continue the Zionist enterprise.”

Palestinian Prime Minister Mohammad Shtayyeh told Haaretz that the Palestinian Authority would seek to have the distinction between areas A, B and C annulled. Bennett responded: “We are in the midst of a battle and they are trying to take our territory. We’ll capture and settle throughout the land of Israel while fending off the illegal Palestinian construction and apply [Israeli] sovereignty [over the West Bank].”

A possible way of ensuring the brakes are applied to any move to annex is the stirring of the International Criminal Court (ICC) into action. This threat could see Israeli leaders indicted for their actions, including breaches of international law and international humanitarian law related to settlements.

Netanyahu, calling this “a travesty,” has indicated that he would use the gathering of world leaders in Jerusalem to urge that they impose sanctions on the ICC. “I think that everybody should rise up against this,” Netanyahu told the Trinity Broadcasting Network, the world’s largest Christian television network.

It seems that, through illegal annexation and settlement expansion, Israel is forging ahead with measures to control the geography of historic Palestine. What would remain to be solved is the demography. How can it reduce the number of Palestinians or remove them altogether? How can it achieve a truly Jewish state between the river Jordan and the Mediterranean when almost half those that inhabit the land are not Jewish?

The answer for committed Zionists is another transfer of Palestinians from their historic homeland. They are looking east, to Jordan, which they claim is the Palestinian state. These ideas have implications both for Palestinians and Jordan.

As for talk of peace, it remains just that, talk. 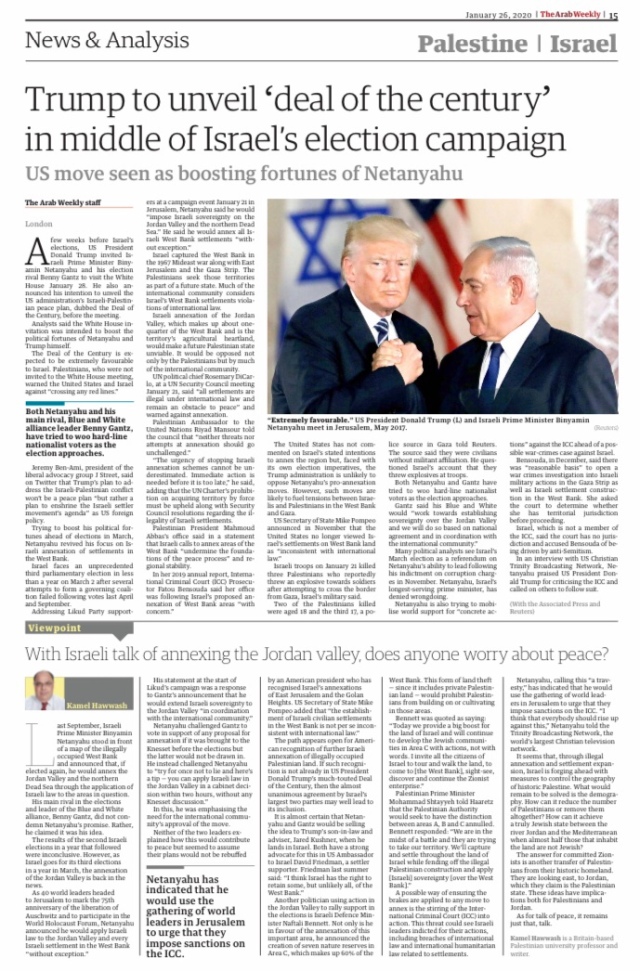